The Earliest Sound Recordings - A Short History of Cylinders

Hagley holds many different forms of recording media from the nineteenth-century through the present. Included in the collections are phonograph cylinders, which were the very first audio recording technology.

Enthusiasts of early sound recordings abound and the equipment still exists, so it is possible to play a cylinder, but I found that there is a lot of self-educating to be done before that can happen! When two boxes of cylinders were brought in for new housings, I set out to learn what I could.

Thomas Edison first patented the method for recorded phonograph cylinders in December 1877. He had somehow spontaneously come upon the idea for creating the recordings which initially used a stylus recording on tinfoil. Although the invention of the cylinder preceded the disc, both recording formats were simultaneously available to consumers in the U.S. from 1893 to 1929.

The size of the cylinders, length of recording, and the speed (rpm) varied and these are relevant details to confirm before any cylinder can be played. In some cases one phonograph machines were equipped with one stylus for recording and one for playing (reproducing). Some reproducers utilize a greater pressure or heavier stylus, which will damage recordings made of the softer wax-like (metal soap) types. The greater pressure used to play disc recordings gave them an early advantage, since they reproduced sound at a much greater volume.

Today it is common for collectors to refer to all cylinders as “wax”, however, there were different materials used as the basis for the cylinders. It is imperative that the material is made is properly identified so that the correct equipment can be identified for playback. One also must consider that the physical contact of stylus on cylinder causes wear, and brown wax cylinders are known to be good for as few as several dozen plays. Incredible technological advances have allowed for digitization using laser scanning for imaging the physical contours of sound recordings and computer software for playback. This technology is not yet available to common folk!

Edison’s earliest cylinders were a combination of white waxes, including beeswax and paraffin. Initially, Edison’s company dealt with problems of waxes melting when the temperature was too high and they had to change this formulation. In 1892 brown colored cylinders made of water insoluble metallic soap were produced. The metallic soap/salt produced by Edison’s company was probably aluminum stearate. This material was blended with ceresine wax or other ingredients depending the time and place of production. Later cylinders of this material may be black.

In 1901 a method of mass production called “Gold Moulding” was introduced by Edison. This process used a vacuum deposition of gold powder over the original recorded cylinder, followed by electroplating with copper to create a sub-master cylinder mold from which multiple copies could be made. Prior to this, performers were recorded numerous times, and multiple recorders were used to record performances simultaneously on multiple cylinders. This is a fascinating fact to consider when deciding upon preservation priorities. Considering this, there could be multiple unique performances sold! Blue Amberol cylinders made of cellulose nitrate were introduced by Edison in 1912, doubling the maximum length of the cylinder recordings to 4 minutes long. This harder material allowed for finer grooves, and therefore more information storage. Cellulose nitrate cylinders from various companies are also found in purple, pink, brown and black colors.

One competitor of Edison was the Indestructible Phonograph Co. of Albany, New York. They made molded celluloid cylinders beginning in 1907. These cylinders, sometimes labelled for Columbia, or called Oxford Indestructible have a cardboard core with metal rings at the inner ends. This was to provide physical stability. 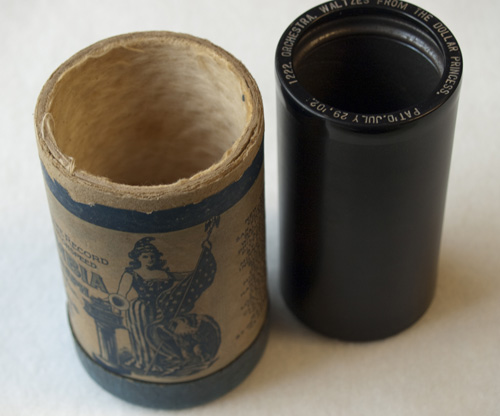 The standard cylinders were most commonly either 2 minutes or 4 minutes in length. As with discs, the finer the groove the more information is stored, and the slower the speed of rotation for proper playback. Although speeds can vary across the duration of a single recording due to inconsistencies, especially with home recordings. Each cylinder holds a single speech, spoken performance, song, or instrumental tune. Considering the time limit, it seems a likely reason that most popular songs recorded for the radio are still typically 4 minutes or shorter! Edison recognized their use as an entertainment medium, but much of the early sales were targeted at businesses which could rent cylinder recording dictation machines. The use of a wax-like compound as recording media allowed for re-use, since the grooves could be scraped smooth, or removed by polishing the tube lengthwise with a cloth and kerosene. This action presented a new recording surface. Blank brown cylinders were sold by Edison for dictation or home recordings. For entertainment in public areas, the pre-curser to the jukebox was used; coin operated phonograph players with a horn for listening. Remember, this was before the advent of amplifiers!

Properly identifying cylinder material is important for preservation. While pure waxes are generally considered chemically stable, the metallic soap composition of the earlier cylinders is not. There are numerous instances found on the web referring to mold growth on “wax” cylinders. In one case the image presented revealed pure white crystalline deposits that are more likely metal salts, possibly caused by storage with improper humidity. Mold is certainly a possibility on contaminated surfaces, but understanding composition and detailed inspection can distinguish between these two problems. Cellulose nitrate is one of the least stable materials found in museums and archives. It is inherently unstable and deterioration occurs by exposure to heat, light, ultraviolet radiation (U.V.) and moisture. Moisture causes hydrolysis of cellulose nitrate, so storage areas should remain between 30-50% relative humidity and cool temperatures. The cellulose nitrate cylinders also have an inner core of plaster, which can swell with exposure to water, causing cracks in the plastic layer. For these reasons, water is not recommended for cleaning them. 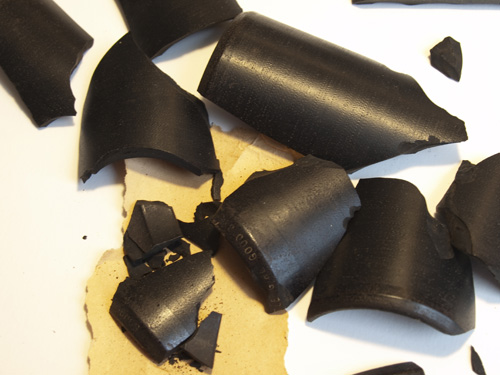 The main factor in preserving the brown and black “wax” cylinders is preventing breakage. They are far more brittle than the nitrate versions, as easily seen in the survey of our collection, which has a number of shattered and crushed items. Once broken, they seem to crumble and turn to dust. The nitrate cylinders tend to shrink because of their inherent chemical instability, making them difficult to play at times. Amazingly, the older wax recordings often are more successfully played for this reason.

Dust is abrasive to these materials as it is with all types of audio recordings. Keeping them sealed in dust-free containers improves the sound of playback, prevents damage to the grooves during playback, limits the corrosive effect of dust, and reduces likelihood of fungal attack.

To listen to some cylinder recordings in digitized versions visit the following:
http://cylinders.library.ucsb.edu/index.php
http://www.loc.gov/jukebox/

The Edison recording studio in Orange, New Jersey is part of the National Parks and may be visited today. In researching this technology, I found that it is far from dead. There are many phonograph cylinder collectors and enthusiasts who go so far as to produce new blank recording cylinders by hand! These folks are not just preserving the relics of the era, but reliving it by continuing to use the original technology! See also: http://www.richardslaboratories.com/