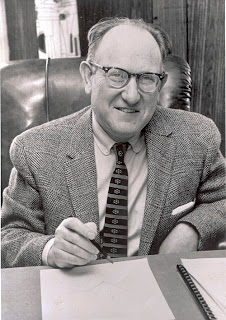 In 2008, Hagley received the Ernest Dichter Papers through a generous donation by his widow, Hedy Dichter. Dichter (pictured, right), a psychologist and marketing expert, has been called "the father of motivational research." His papers include a significant collection of proposals and reports documenting his work studying the psychology of consumers for major industries in the United States, Western Europe, and to a lesser extent, Canada, Mexico, and Israel.

Born in Vienna, Austria on August 14, 1907, Ernest Dichter was the eldest of three children. During the post-WWI years his father had great difficulty keeping steady employment and worked as a traveling salesman. It became important for son to help father in supplementing the family's income, and from 1924 until 1927 Ernest worked in his uncle's department store as a sales clerk and then window decorator. During this time, Dichter's interest in consumer needs and buying began. He received scholarships to study at the University of Vienna and Paris' Sorbonne. By 1930 the Depression had taken its toll, making it necessary for him to return to Vienna where he worked as a tutor and window dresser, while pursuing his studies in psychology.

In 1934, Dichter received his Ph.D. from Vienna, and the following year married Hedy Langfelder, a concert pianist. Dichter spent much of his professional life studying the wants and needs of consumers. Among his admirers were Dr. Wilhelm Stekel, a Viennese psychoanalyst and former assistant to Sigmund Freud, Vice President Hubert Humphrey and the Democratic National Committee, Christian Broadcast Network, and Campbell Soup Company.

A pioneer in motivational research, surveys in the Dichter collection at Hagley dissect the purchasing objectives of consumers, and document the transformation of products like Hires Root Beer, Lifebuoy Soap, and Mattel's Barbie.

For more information, click to view the finding aid for the Dichter Papers at Hagley.

The description of Dichter's life comes from an unpublished article by Daniel Horowitz, "The Birth of a Salesman: Ernest Dichter and the Objects of Desire." Read the full article online (A special thanks to Professor Horowitz for giving us permission to post his valuable work on Hagley's website)

Daniel Horowitz has also written about Dichter in the following publications:

The Anxieties of Affluence: Critiques of American Consumer Culture, 1939-1979, University of Massachusetts Press, 2004