From "Home Sweet Home" to "Karn Evil 9" : Hagley Documents the Origins of the Synthesizer

Olson and Belar were quick to grasp the importance of Claude E. Shannon’s groundbreaking 1948 paper, “A Mathematical Theory of Communications,” the foundation stone of modern information theory.  On May 11, 1950, they issued their first internal research report, “Preliminary Investigation of Modern Communication Theories Applied to Records and Music,” in which they proposed to consider music mathematically as information, thus making it possible to generate any kind of music mathematically instead of from traditional instruments.  On February 26, 1952, Olson and Belar demonstrated their first experimental model for David Sarnoff and other company officials, having it perform renditions of “Home Sweet Home” and “Blue Skies.” 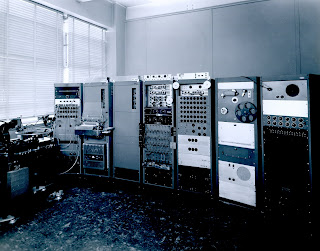 Original Mark I synthesizer as it appeared in 1955.  Pictured at the extreme left is the recording unit that generated the output in the form of a phonograph record.  The second cabinet from left contains the paper record drive for input.  The five cabinets to the right contain the synthesizer proper.

Another three years of research and experimentation were required to render more complex pieces and achieve something close to commercial sound quality. The Mark I Synthesizer (image to right,information below) was revealed to the world by Gen. David Sarnoff in a January 31, 1955 speech to the American Institute of Electrical Engineers, and a 12-inch demonstration LP was offered commercially.  Like all computers of the period, the Mark I was a room-sized array of vacuum tubes based on a separate oscillator circuit for each of the twelve tones of the musical scale and was programmed using punched tape.  It could not be “played” in the conventional sense.  Rather, a composer had to work with the engineers, tweaking the program until the desired sound was achieved. Olson and Belar produced an improved Mark II in 1957, which later served as an experimental tool for modernist composers who could use it to create effects not possible with acoustic instruments. 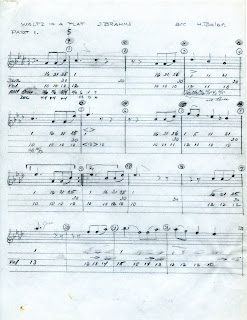 Score for the melody of Brahms Waltz in A Flat as arranged by Herbert Belar for playing on the synthesizer.

Olson and Belar had pushed their experiments by holding out the possibility of creating music electronically without full bands or orchestras, but RCA’s Victor recording division quickly realized the threat this would pose to its unionized musicians and contact recording artists.  Mark I was eventually donated to the Smithsonian, and Mark II to the Columbia-Princeton Electronic Music Center, where it was used by a few modernist composers.  It was one of the people working at the center, the electrical engineer Robert Moog (1934-2005), who developed an improved, compact synthesizer with a traditional keyboard interface, and eventually, a portable, affordable instrument that could be used in popular music.  Moog also worked with composers and musicians, refining his synthesizers first for studio work and eventually live performance, making the synthesizer a staple of Seventies art rock, electronica and disco.

Belar’s papers include his research reports as well as notes and calculations, although much of the material requires that the user be well grounded in both electrical engineering and music.  There are photographs and sheet music for the pieces used as test subjects, and a 45 RPM record of music produced on the synthesizer.  Among the most interesting items is a 1955 letter to Belar from Moog (see below), then an undergraduate at Queens College, requesting Belar’s advice in getting access technical information for his own experiments. 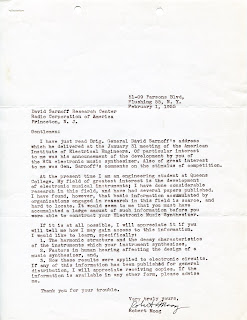 Hagley is continuing to process the huge collection of the former David Sarnoff Library and make descriptions and pieces available online. To learn more about this collection, please contact Hagley Library Manuscripts and Archives department by using the AskHagley form or by calling 302-658-2400 x330.

For more information about the Hagley Library, please visit www.hagley.org/library/.

Christopher T. Baer is the Assistant Curator of the Manuscripts and Archives Department at Hagley Library.