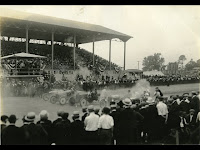 Hagley's Pictorial Collections Department recently cataloged two albums of photographs of the 1919, 1920, and 1921 Delaware State Fairs in Elsmere, Delaware. About 50 images from the albums have been scanned and are now available online in the Hagley Digital Archive.

Originally held in the city of Wilmington, the Delaware State Fair moved to the nearby suburb of Elsmere in 1917. The Delaware State Fair Association chose Elsmere because it offered plenty of open space for the construction of large fairgrounds, as well as convenient access to trolley lines into Wilmington and proximity to recently built highways and artery roads. The new Elsmere fairgrounds included racetracks for horses, motorcycles and automobiles; a grandstand; exhibition buildings; and a large parking area. 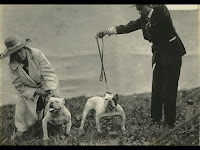 Opening day for the Elsmere fair was held annually on Labor Day; the fair lasted for five days, ending with fireworks on Friday night. Fairgoers enjoyed events such as agricultural, automobile, and mercantile exhibits; contests, competitions, and races; horse and dog shows; and sideshow and vaudeville acts. Wilmington newspapers reported that the 1919 Delaware State Fair was "larger and more elaborate…over all other years" featuring the "greatest auto show ever witnessed in Delaware," the "best dog show in [the] Fair's history," and "the largest [crowd] ever assembled at any time for any meeting or function in the State."

That same year, in 1919, a second fair was organized 60 miles south of Elsmere in Harrington, Delaware. A group of locals founded the Kent and Sussex County Fair for the benefit of the rural communities in the central and southern portions of the state. As the Kent and Sussex County Fair grew, more and more events from the Elsmere Fair moved down to Harrington, until by 1928, only the racetrack and grandstand at the Elsmere fairgrounds continued to be used. In 1962, the Kent and Sussex Fair Association purchased the name "Delaware State Fair" from the defunct Elsmere organization. The Delaware State Fair continues to be held annually in Harrington.

History of the Delaware State Fair at Harrington

History of the town of Elsmere, Delaware