Inventor Emily Evans Tassey and The Hunt for Red October

Skip Tyler: “This, this could be a caterpillar.”

Tyler: “It’s like a, uh, jet engine for the water.  Goes in the front, gets squirted out the back.”

That little exchange is from one of my favorite movies called The Hunt for Red October.  Based upon a book by Tom Clancy, it features Alec Baldwin as a CIA analyst trying to locate a Russian nuclear submarine captained by Sean Connery.  The sub’s engines, described above, sucks in water at the front and squirts it out the back, making the sub so quiet that it is virtually undetectable by the US Navy.  Little did I know that I would run across an invention by Emily Evans Tassey way back in 1876 that does the same thing!  And Hagley holds not one but two models from this groundbreaking female inventor.

Born in 1823, Tassey’s father was a merchant who owned a textile mill as well as a general store and post office in the town of McKeesport near Pittsburgh, Pennsylvania.   Educated at Steubenville Seminary in Ohio, she taught school in her hometown and later at Pittsburgh High School.  At age 21, she married lawyer William D. Tassey and had three children.  William died unexpectedly while on a trip to Memphis, Tennessee.  A widower by age 34, she moved back to Pittsburgh and started teaching again to support her family.

By age 52, she returned to her hometown and began inventing.  She did not have to wander far for inspiration.  By then, McKeesport was one of the fastest-growing municipalities in the country. The local steel mill, as well as the steel industry as a whole, was booming.  Barges full of coal, ore, and finished steel products, as well as steamboats carrying cargo and passengers, plied the rivers around Pittsburgh.  As the first dry-docks in the area were built in McKeesport in 1836, shipbuilding and repair also became important industries.  In only four years, from 1876 to 1880, Tassey would earn five patents—all related to marine technology. 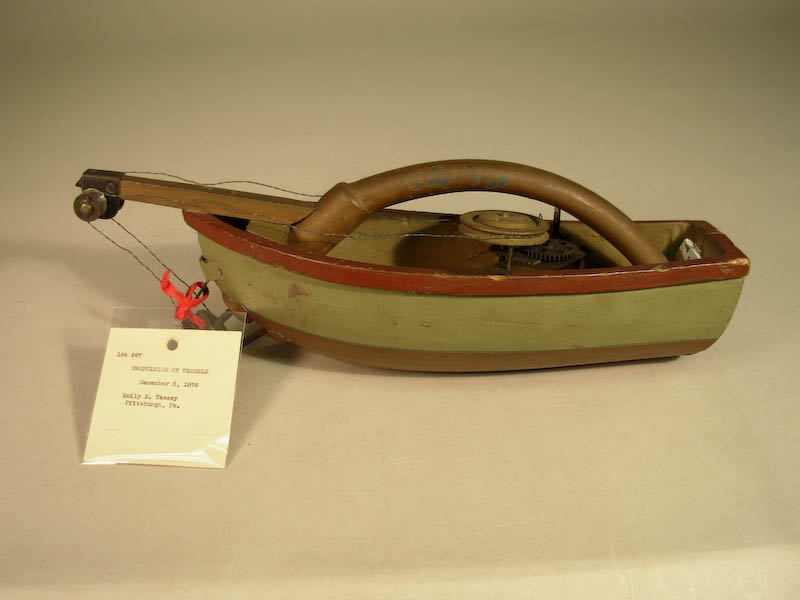 This model is for a propulsion system for a boat or ship.  The arching tube seen at the center contains a propeller that sucked in water at the front and squirted it out the back.  This is the same idea used in The Hunt for Red October over a hundred years later! 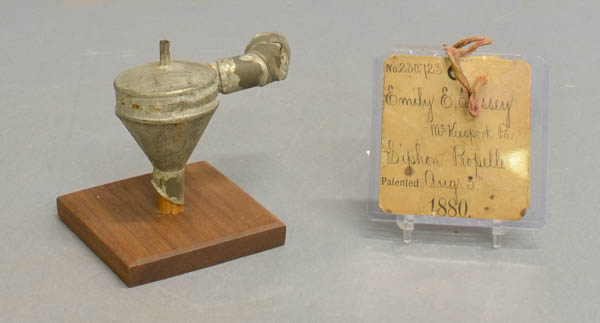 Tassey’s second model is for a pump for discharging large quantities of water “as from a coffer-dam or dry dock.”  In addition to its use in dry-docks, such pumps allowed workers to sink footers for the piers that support the 446 bridges that span Pittsburgh’s rivers today, earning it the title of the “City of Bridges.”

Like many women inventors, Tassey did not become rich or famous through her inventions.  Sadly, she ran afoul of the law in her later years.  By age 62, she was found guilty of erasing and changing figures in her brother’s account ledgers to keep from paying the store clerk his full salary.  Later, she was charged with larceny and receiving stolen goods and paid a hefty settlement for violating a contract.

Still, Emily Tassey’s unique contributions to American innovation deserve respect and recognition.  Who knows what other inventors looked at her ideas and found inspiration for their own?  Visitors to Hagley’s exhibit, Nation of Inventors, will see Tassey’s model, learn her story, and perhaps find their own inspiration.  Maybe the next Tom Clancy will be one of them!