Nearly one year ago I began volunteering in the library conservation lab at Hagley Museum and Library. I initially worked on relatively simple projects such as re-housing and surface cleaning with the guidance of conservator Laura Wahl. As my skills and knowledge grew, the projects I was given became more involved. The conservation of Thomas Lamb's scrapbook of Kiddyland drawin­­­gs (part of the Thomas Lamb papers, Accession 2181) is undoubtedly the most involved project that I have been a part of thus far. After completing an initial condition report, it was determined that the treatment process would involve re-housing, surface cleaning, reattaching loose illustrations, and mending major weaknesses in the supporting pages. Although my first exposure to the Kiddyland scrapbook occurred shortly after I became a volunteer, Jennifer White, fellow summer intern, and I are now very familiar with this book of illustrations by industrial designer Thomas Lamb.

Thomas Babbit Lamb was born in New York City in September 1896. At the age of fourteen Lamb began to work at a textile design shop during his afternoons and continued to do so for the following three years. Lamb then opened his own textile design shop and, by the 1920s, became popular for his bedspreads, napkins, and draperies. In addition to the widespread success of his textile products, Thomas Lamb demonstrated his creative diversity when he transitioned from industrial designer to children’s story illustrator. One of Lamb’s early illustration contracts with Good Housekeeping magazine made Lamb and his drawings a quick hit with his popular Kiddyland cartoons. 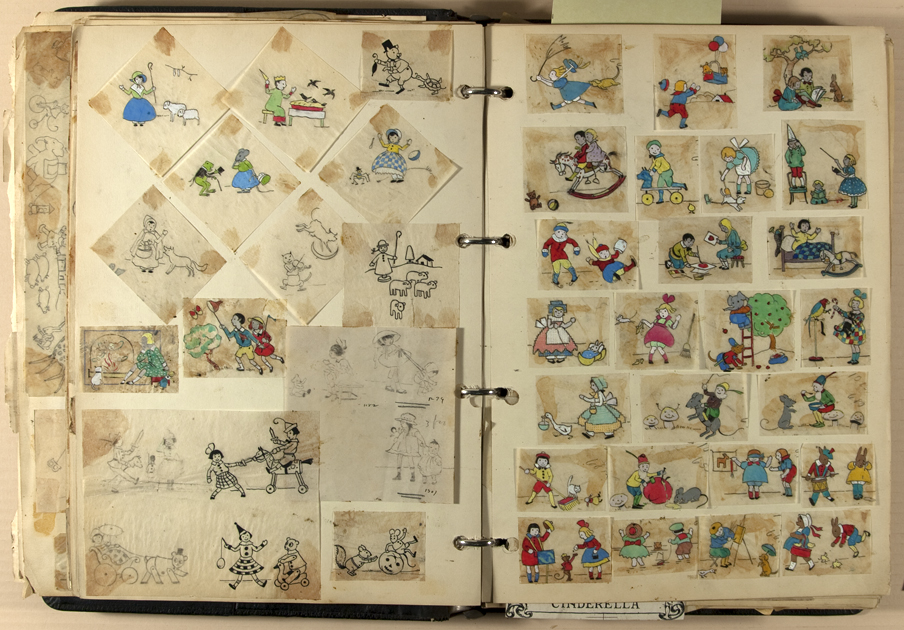 Lamb continued to capitalize on the success of the cartoons by creating various products that incorporated the Kiddyland scenes. The scrapbook White and I treated contains illustrations for Lamb’s line of Kiddyland children’s handkerchiefs. Individual images and scenes were drawn on many pieces of tissue paper and adhered to the heavy weight paper of the scrapbook pages with a rubber-based glue that became brittle over time. In order to stabilize the contents and make the Kiddyland drawings a more accessible resource in the library’s collections, scrapbook pages were removed from the original binder, numbered, and put into individual acid-free paper folders to prevent further detachment of any illustrations during the treatment process.

With the preliminary condition and rehousing tasks complete, the next phase of treatment ensued. Using the patterns of staining on the scrapbook pages and illustrations, caused by the original adhesive, the locations for the loose drawings were identified and organized for later in the process. Next, surface cleaning the scrapbook pages was performed in a series of steps. Vulcanized rubber sponges were used to carefully remove as much of the general surface dirt as possible followed by a narrow eraser for more difficult spots. To remove additional discoloration a gel mixture of methylcellulose (cellulose derivative in gel form) was then applied with cotton swabs to minimize significant stains on the tissue paper and scrapbook pages surrounding the Kiddyland drawings. 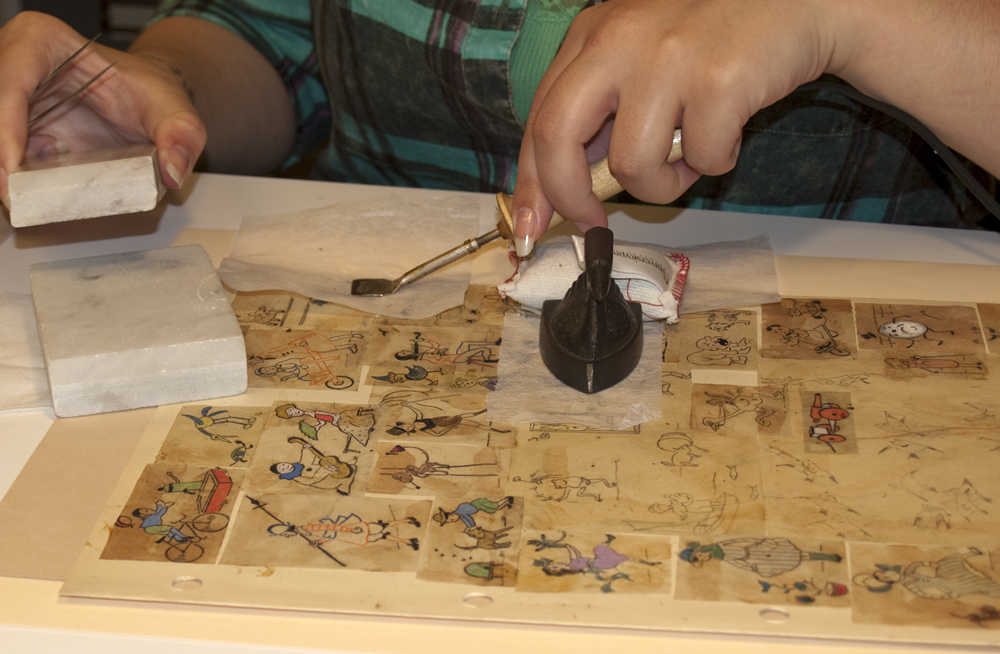 Following the thorough cleaning that resulted in significant aesthetic improvement for the pages and illustrations, the detached drawings were reattached in their original locations on the supporting scrapbook pages. For this task thin strips of a heat-activated adhesive tissue were folded to create a ‘hinge’ connecting the tissue paper to the support. The adhesive hinges beneath the corners of the drawings were very carefully heated with a tacking iron to activate the adhesive properties. Further stabilization of the scrapbook was achieved by addressing weaknesses and tears in the heavier weight paper by affixing mends to these problem areas using a wheat starch paste and a very thin Japanese tissue.

The final step in the conservation treatment process for the scrapbook of drawings on Kiddyland will be to consolidate the lifting areas of colored gouache paint, used to add color to various illustrations throughout the book. 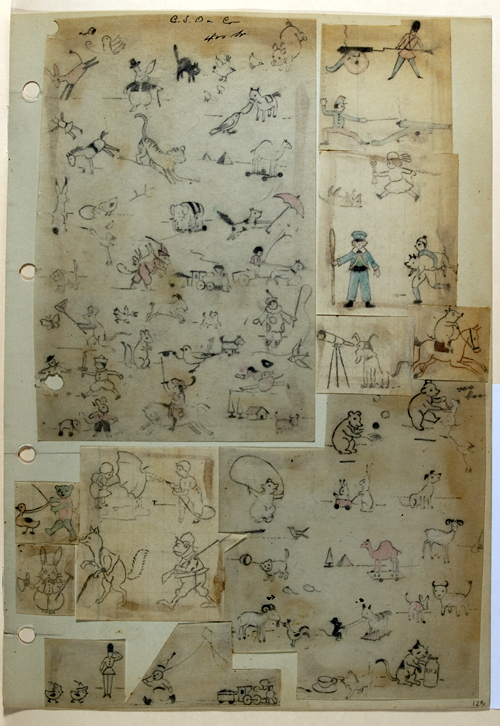 The completion of the conservation treatment for Thomas Lamb’s scrapbook of drawings on Kiddyland during my summer internship at Hagley Library allowed me to gain a wide range of knowledge and skills on the conservation of paper objects. The process also allowed me to participate in my most comprehensive treatment to date and taught me more about the ups and downs of the work of a conservator. What begins as an exciting project can eventually cause some frustration as new challenges present themselves along the way. However, as I reflect on the project, the feeling of pride in the conservation work completed and becoming a part of the history of the scrapbook helped make my summer internship a valuable, unforgettable experience. I look forward to new treatment challenges along my path towards preserving pieces of cultural heritage at Hagley Museum and Library.