Update 2013: A version of this exhibit is now online

"Beer and Brewing History at Hagley" is a new exhibit opening on August 6th in the Library Building at Hagley Museum and Library in Delaware.  The exhibit will showcase library materials related to the history of beer-brewing in Delaware and Pennsylvania and beyond. Featured items include beer brewing manuals and recipe books from the 1820s, brewers' and maltsters' trade cards from the 1876 Centennial Exhibition in Philadelphia, ephemera from the Pabst Brewing Company and D.G. Yuengling and Sons Brewing Company, late 19th century illustrated souvenir albums from Philadelphia breweries, and early 20th century photographs of brewery buildings and beer delivery trucks in Philadelphia and Wilmington.

Bergner & Engel Brewing Company, located in the Brewerytown section of Philadelphia, was the third largest beer producer in the country in 1877. 32nd & Master Streets, Philadelphia, Pennsylvania, ca. 1900
Beer and brewing have long held an important place in American history, particularly in the Delaware and Pennsylvania region. Seventeenth-century English colonists brought with them a thirst for ales, porters and stouts, and colonial brewers were quick to establish brew houses for the production of these traditional English beers. As early as 1696, there were at least four large brew houses in Philadelphia, plus numerous small brew houses attached to private residences. Even William Penn constructed a brew house at his estate at Pennsbury in Bucks County, Pennsylvania. Beer was such an important staple in the early American diet that it was common for colonists to brew low-alcohol beer at home for everyday consumption at the table, while commercially-brewed strong beer was served in taverns and ale houses.

Americans continued to prefer English-style ales until the 1840s when German immigrants introduced lager beer. Fermented using a different type of yeast, lager beer is light and effervescent, a marked contrast to heavy, malty ales. Lager beer was swiftly embraced by American beer drinkers, and by 1875, there were nearly 3,000 American breweries producing over 8.7 million barrels of beer annually. Philadelphia had been a major brewing center since before the Revolutionary War, and the number of breweries in the city continued to increase; in 1890, Philadelphia was home to 91 breweries, many of which were located in the Brewerytown section of the city. 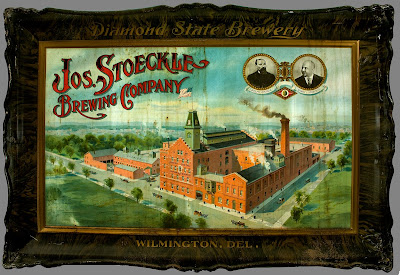 American breweries enjoyed continued success year after year, until the Temperance movement began to take hold in the late nineteenth century, pushing the county closer and closer to outlawing all forms of alcoholic beverages. The movement for a "dry" America culminated in the passage of the Prohibition Amendment in 1920, which banned the manufacture, sale, and transportation of intoxicating beverages, including beer. While some breweries survived this period by switching to the manufacture of soft drinks or non-alcoholic beer, most brewing businesses failed and never re-opened after the repeal of Prohibition in 1933. 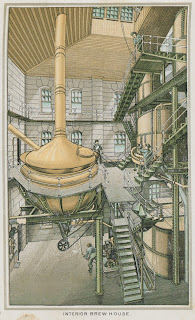 Following Prohibition, thirsty Americans demanded greater and greater quantities of beer, and brewing once again became big business, with the biggest breweries experiencing the greatest success. Large national companies, such as Anheuser Busch and Pabst Brewing Company, bought out smaller breweries, until by 1979, only 45 breweries were operating in the entire country. Lager was the predominate beer produced through much of the mid-twentieth century; other styles such as porter and stout were largely unavailable in America at that time.

Beginning in the early 1980s, in response to the lack of variety on the beer market, some Americans began to brew small batches of specialty beers at home, sparking a trend toward small-scale production of high-quality beers that has developed into today's craft brewing industry. In 2008, there were over 1500 craft breweries, microbreweries, and brewpubs operating in the United States producing over 8.6 million barrels of craft beer. Today's beer drinkers can choose from any number of different styles of beer, from the traditional American light lager to English-style porters and stouts, to more exotic varieties such as wheat beers, barley wines, pale ales, lambics, and saisons.

Update 2013: A version of this exhibit is now online

Baron, Stanley. Brewed in America: A history of beer and ale in the United States. Boston: Little, Brown and Company, 1962.