Museum Collections: The du Pont Story on a Hooked Rug

Many times, people have asked me what my favorite artifact in the collection is.  But I have too many to just give one.  Here is one of my favorites. This artifact is an incredible work of art.  Not only is this magnificent hooked rug visually interesting, it combines both of our collecting areas admirably.  It represents important icons from the history of the du Pont family in America and was made from DuPont Company’s nylon.

The artist who designed and made this rug was a du Pont who was a direct descendent of Eleuthère Irénée du Pont, the founder of the DuPont Company.  Born Nancy du Pont Reynolds (later Mrs. Edward W. Cooch, Jr.), she began making this rug in her late 20s.  It was intended for use in a house but ended up in storage where it remained until it came to Hagley.

The process began by her drawing the pattern you see below and determining what kind of material to make the rug out of.  Typically, hooked rugs were made from wool, but she decided to use nylon instead.  Introduced to the public in the late 1930s, by the late 1940s DuPont chemists were exploring new uses for nylon including for carpets and rugs and this had great appeal to her.  It was so new that all colors in the rug had to be customed-dyed using experimental dyes to her color specifications.  This is probably the only hooked rug made from nylon.  Ultimately nylon turned out to be a poor choice even though the colors are as brilliant  as they were when new.   But in limited active use, the rug began to fray and pill on the surface when it was walked on and there is evidence of that on the rug.

The rug depicts the history of the du Pont family and the DuPont Company in America.  Each image shows a time, event, invention or symbol in the du Pont story.  The design centers around the “American Eagle which was the ship that brought E. I. du Pont and his family to America.  He later founded the DuPont Company.  The date 1800 indicates the year they arrived in America and 1950 represents their 150th anniversary.  Images include buildings on the Hagley property such as the barn and first office towards the top and a gunpowder roll mill on the Brandywine River on the lower right side. 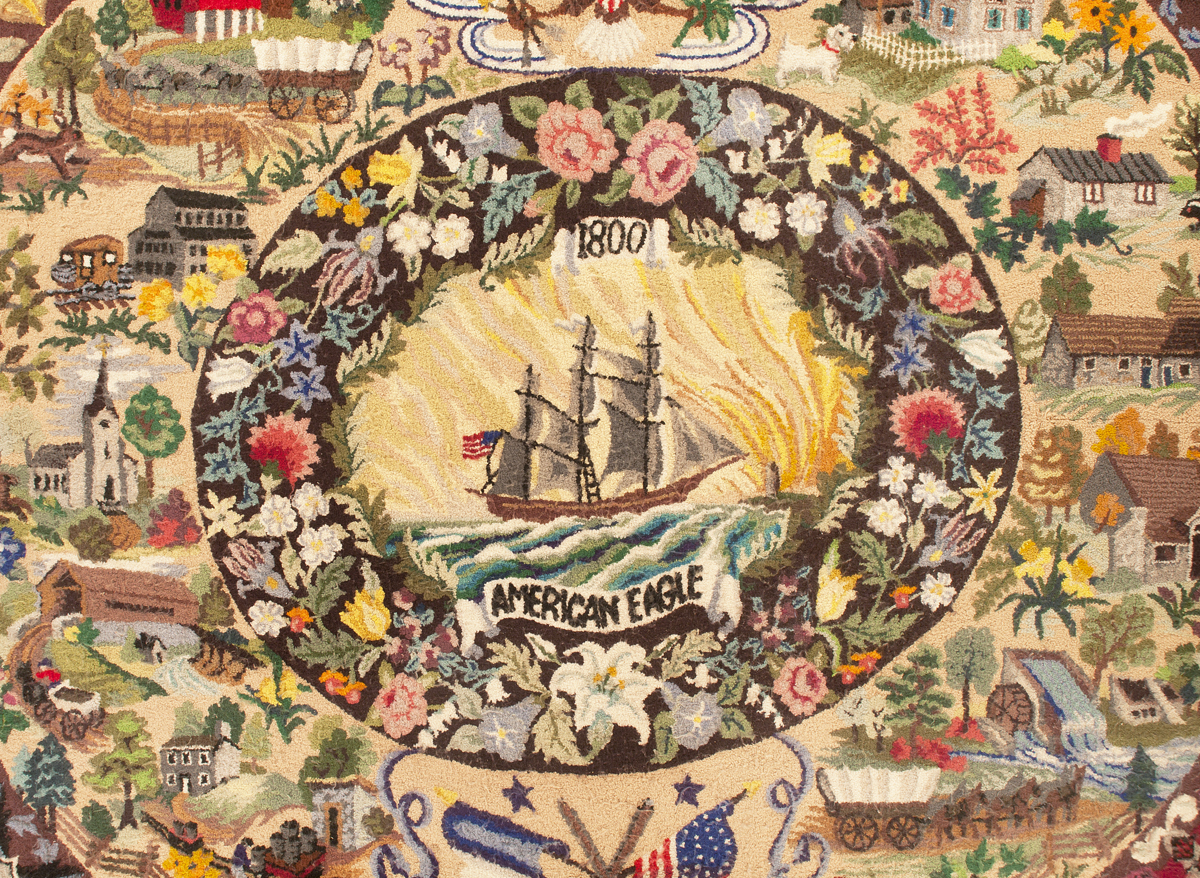 Mrs. Cooch was an artist and I believe this is her masterpiece!  One of the most amazing things she told me was that she started it in the middle and worked her way out to the edges.  After she finished almost half the rug, she discovered a mistake and pulled everything out and started over again!  Remarkable!

Debra Hughes is the Hagley Museum Curator of Collections and Exhibits.