In 1816, the first savings bank in America, the Philadelphia Saving Fund Society (PSFS), was founded. It began as a single office next to a tavern on Sixth Street in Philadelphia. Over the course of the next century, the Society would grow, relocating its offices several times and opening several branch offices around the Philadelphia area. By the 1920's, the bank was one of the largest in America, and it was decided that a new office building was necessary. 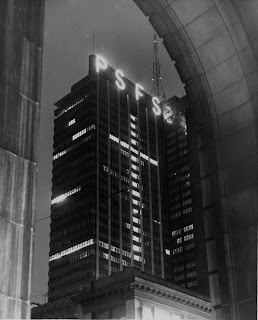 Construction on the PSFS building began in 1931 under architects George Howe and William Lescaze with the design slogan, "Nothing More Modern."  The building was designed in the modernist "International" style that had gained popularity in Europe. The norm for bank architecture had been to use a combination of historical styles and ornamentation. The PSFS building, however, would be the first modern skyscraper in America, foregoing ornate masonry for simplicity and function. Many contemporaries thought the 491-foot-tall building a prominent eyesore in Philadelphia's skyline.

The building was designed to be as functional as possible. Windows made up 65% of the surface area of the outer walls to maximize natural light in the building. The ground floor had shops and an entrance to the subway concourse. Escalators led up to the second floor, the main banking floor. The third and fourth floors housed executive and building management offices and the safe deposit vault. The top floors of the building composed the executive level, with board rooms, dining rooms, and a solarium. The rest of the tower housed office space used by the Society or rented to other businesses. 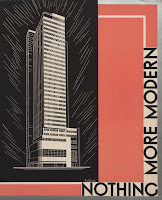 The PSFS building represented many firsts in the United States. It was, as stated, the first modern skyscraper in America and the tallest building in Philadelphia. It was also the first building of its kind to have year-round "manufactured weather," with individual thermostats in every office. The building's new elevator system was touted as being 20% faster than in typical buildings elsewhere. Each office was also fully equipped with radio outlets.

In 1969 the Philadelphia Chapter of the American Institute of Architects named the PSFS building the most important building in Philadelphia for the past century, and it was named a National Historic Landmark in 1976.

The skyscraper was renovated into a hotel in the 1990's and is currently known as the Loews Philadelphia Hotel. The 27-foot-tall "PSFS" rooftop sign can still be seen lit up in the Philadelphia skyline every night. Photos of the building's design, construction, and interiors since the early 1930's, along with promotional materials for the building, are available at the Hagley Library and in the Hagley Digital Archives. Please feel free to explore our collections and contact us with any comments or questions you may have.

Will Drewen, University of Delaware