As the clock struck midnight on January 17, 1920, the 18th Amendment to the Constitution went into effect. With this amendment, the manufacture, sale, and distribution of alcoholic beverages became illegal in the United States. Prohibition, as it came to be known, was nearly impossible to enforce and led to a rise in organized crime, as well as bootlegging and illegal distilling. Prohibition created more problems than it solved, and in 1933 the increasingly unpopular measure was repealed by the 21st Amendment.

The du Pont family were heavily involved in efforts to put an end to Prohibition. In the mid-1920s, several du Pont family members, including Pierre and Irénée du Pont, became important members of the Association Against the Prohibition Amendment. The AAPA initially formed in 1918 to lobby against the passage of the 18th Amendment and the Volstead Act, which established the enforcement measures of Prohibition. After the ratification of 18th Amendment and the passage of the Volstead Act, the AAPA fought for repeal. The Association argued that temperance should not be imposed by the federal government, and that the regulation of alcohol sale and distribution should be left up to state and local governments. Though the AAPA pushed for the immediate reintroduction of beer and light wine, they still opposed saloons. Though the organization was relatively quiet in the early 1920s, the membership of the du Ponts revitalized the organization.

The Association Against the Prohibition Amendment started an anti-Prohibition publicity campaign leading up to the election of 1928 and helped build support for the eventual repeal. Hagley has digitized a number of postcards from the AAPA’s campaign to repeal Prohibition, titled “Prohibition-Probes.” These postcards used a variety of arguments for repeal, ranging from statistics on alcohol consumption and crime to humor. Several of the cards highlighted the problems that Prohibition had created and asserted that the “noble experiment,” as Herbert Hoover called it, had failed. One postcard even lampooned Hoover, saying that “the bootlegger is of noble descent.” The pro-Prohibition Hoover won the 1928 election, but the onset of the Great Depression made the amendment even more unpopular, and the AAPA gained more momentum. In February, of 1933, Congress proposed the 21st Amendment to repeal Prohibition, and Delaware ratified the amendment by convention that June, becoming the sixth state to do so. 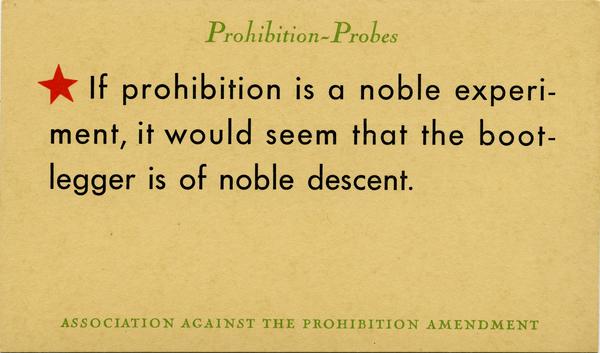 The Prohibition-Probes postcards provide a unique snapshot of the movement to repeal Prohibition. They can be accessed in the Hagley Digital Archives at digital.hagley.org.

Lloyd Tomlinson is a graduate student in the Department of History at the West Virginia University. He served as Hagley’s marketing intern in 2019.​