Recently while cataloging The Columbian Crew, I paused to enjoy an intriguing feature of this employee magazine. Published by the Columbian Rope Company of Auburn, N.Y., in 1945, issue number 9/10 contains an entire page dedicated to humor under the banner “Knot So Funny.” As I perused these bits of wartime wit, I reflected on the role of humor in the workplace as evidenced by amusements in employee newsletters. A typical objective of these publications is to build morale; or, as stated in the inaugural issue of Strawbridge & Clothier Store Chat, “its purpose is to afford a means of interchange of news and views both entertaining and instructive.” Hagley is an ideal place to examine such vehicles of communication, as our catalog contains more than 300 items related to the subject term “Employees' magazines, newsletters, etc.” 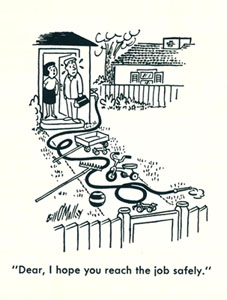 Browsing the list of these titles in our OPAC reveals a subtle form of embedded humor as puns. Consider the organ circulated to staff of the Philadelphia Quartz Company as the Chemunicator; clearly the spelling sets it apart from the Ford Instrument Company Communicator, or the Wyeth-Ayers Communiqué. Another play on words emerges in the Repauno Dynam-Item, a monthly publication for the staff of a DuPont explosives manufacturing site. Also of note is The Allied Kidder which was created by and for the employees of the Allied Kid Company, a tannery in Wilmington, Delaware, in June 1935. In striving “to promote and encourage a feeling of unity among all employees,” its premier issue welcomes “humorous, interesting and instructive submissions.” 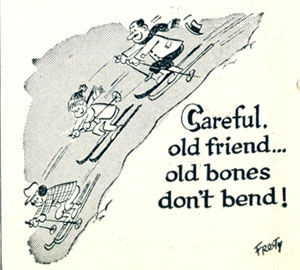 An examination of sample employee newsletters in our stacks shows that expressions of humor take many forms inside the covers. Single-frame comics are prevalent, especially those that promote safety (exemplified by two illustrations accompanying this blog). Amusing anecdotes poke fun at human nature, often involving stereotypes such as a Scotsman’s thrift or a housewife’s lack thereof. Daffy definitions appear, like the following pair found in the June 1993 issue of Legal Bugle: “Bigamy: The only crime where two rites make a wrong,” and “Statistics: Numbers looking for an argument.” Generally, these quips are scattered as space permits, adding levity to the page while filling the gaps between more substantive columns.

In contrast to witty fillers, a dedicated humor page in The Columbian Crew appears exceptional but not only for its expanse. “Knot So Funny” is emblazoned with a stylized caption and adorned with a decorative rope swag connecting the two masks of comedy and tragedy. A closer look at some of the “jokes” on this page reveals a dark resonance with the grim political tensions and strained economic conditions of the 1940’s. Thus, a collection of employee newsletters may help substantiate a social context for humor or virtually any aspect of working life, even one that is not so funny.