This past summer, I had the opportunity to attend the American Library Association Conference in New Orleans.  As my husband and I planned our trip, we decided that it would be interesting to make the trip by taking a train. The trip from Wilmington, Delaware is 27 hours, so we decided to take the overnight train on the South bound journey, and fly back.  We had a wonderful experience on the train, watching the towns go by in the comfort of our little “roomette.”

I have always wanted to take a long trip by train.  I started thinking about the golden age of train travel, and the Pullman cars that I had heard so much about, and I decided to explore the history of sleeping cars in the Hagley Library.

The first railroad sleeping cars were put into service in Pennsylvania, for the Cumberland Valley Railroad in 1839.  The cars, named the Chambersburg and Carlisle, were built by Philip Imlay of Philadelphia. They were divided into two sections, one coach section with bench-style seating, and at the opposite end, three sleeping car berth sections, separated by partitions, two for men and one for women.  The berths were upholstered boards, in three rows, one above the other, held by leather straps, and in the daytime were folded back against the walls.

In 1856, Theodore Woodruff received two patents for a railroad convertible car seat. In 1857, the Watson Manufacturing Company of Springfield, Massachusetts produced America's first, specifically designed sleeping car using these patents.  Woodruff's design divided the car into sections, with seats permanently fixed in pairs facing each other. A lower and a middle berth were produced by a complicated arrangement of pivoted seat cushions. An upper was produced by hinged frames that folded up against the wall by day. At night curtains were hung between, and in front of, the berths.

During the economic panic of 1893, the Pullman Palace Car Company cut wages as demands for their train cars plummeted and the company's revenue dropped. A delegation of workers complained of the low wages, sixteen hour workdays, and the company's failure to decrease rents or the price of goods. The Pullman Strike began May 11, 1894, with a walkout by Pullman Palace Car Company factory workers after negotiations over declining wages failed.

Many of the workers were already members of the American Railway Union (ARU), led by Eugene V. Debs, which supported their strike by launching a boycott on June 26, 1894. Within four days, 125,000 workers on twenty-nine railroads had quit work rather than handle Pullman cars.

The strike ended with the intervention of the United States Army, sent in by President Grover Cleveland on the premise that the strike interfered with the delivery of U.S. Mail, violated the Sherman Antitrust Act and represented a threat to public safety.The events of the Pullman strike led to a deepening awareness that there was a "labor problem" in America, a "labor question" in American politics.

In the heyday of the 1920s, Pullman operated 9,800 cars staffed by 10,500 porters, attendants, and maids.  Much of the business went to business travelers who could spend a business day in one city, catch an evening overnight train to another city 300 to 500 miles away. In the morning, they were ready for another round of appointments in a new city. 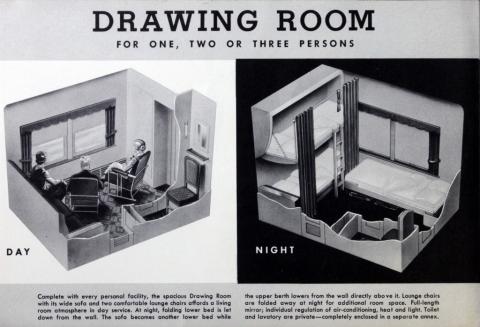 The Pullman Porters organized and founded the Brotherhood of Sleeping Car Porters in 1925. The BSCP was the very first African-American labor union to sign a collective bargaining agreement with a major U.S. corporation.

Business travelers deserted the extensive network of Pullman service when commercial jetliners came on the scene in the 1950s.  Operations of the Pullman Company sleeper cars ceased and all leases were terminated on December 31, 1968.

As I discovered, Amtrak continues to offer sleeping-car space on many of its long-distance trains.

If these topics pique your interest in rail travel, feel free to browse Hagley Library's online catalog at www.hagley.org/library, and stop by the library to do some reading.  Here are some subject headings you might consider searching: