The Trolley Square neighborhood in Wilmington, Delaware, is well-known for its distinctive restaurants, bars, and nightlife. Craft beer aficionados and foodies alike flock to the Trolley Tap House and Catherine Rooney’s for a pint, while staples like Kelly’s Logan House – the oldest Irish bar in Delaware – give a glimpse into the neighborhood’s distinctive past. Formerly the Forty Acres neighborhood (which is still recognized today), Trolley Square continues to be one of the city’s most vibrant communities, particularly for young professionals. However, the neighborhood’s 150 year transformation and its distinct namesake offers insight into how a sense of neighborhood identity developed from a derelict trolley car barn turned shopping center.

The origins of the Trolley Square name date back to February 4, 1864 with the incorporation of the Wilmington City Railway Company, which operated the city’s first horse-drawn street railway. The company’s primary promoter and first president was Joshua T. Heald (1821-1887), a Mill Creek Hundred native who began his career working as a bookkeeper for railcar manufacturers turned shipbuilders, Harlan & Hollingsworth. In the 1850s, Heald amassed his fortune through real estate and banking, thus influencing the route of his new street railway. The company laid tracks from the Philadelphia, Wilmington & Baltimore Railroad station at Front and Walnut Streets north to Delaware Avenue and to the former Baltimore & Ohio Railroad at what today is the Acme supermarket in Trolley Square. The company’s offices, stables, and car barn were built at the corner of DuPont Street and Delaware Avenue. 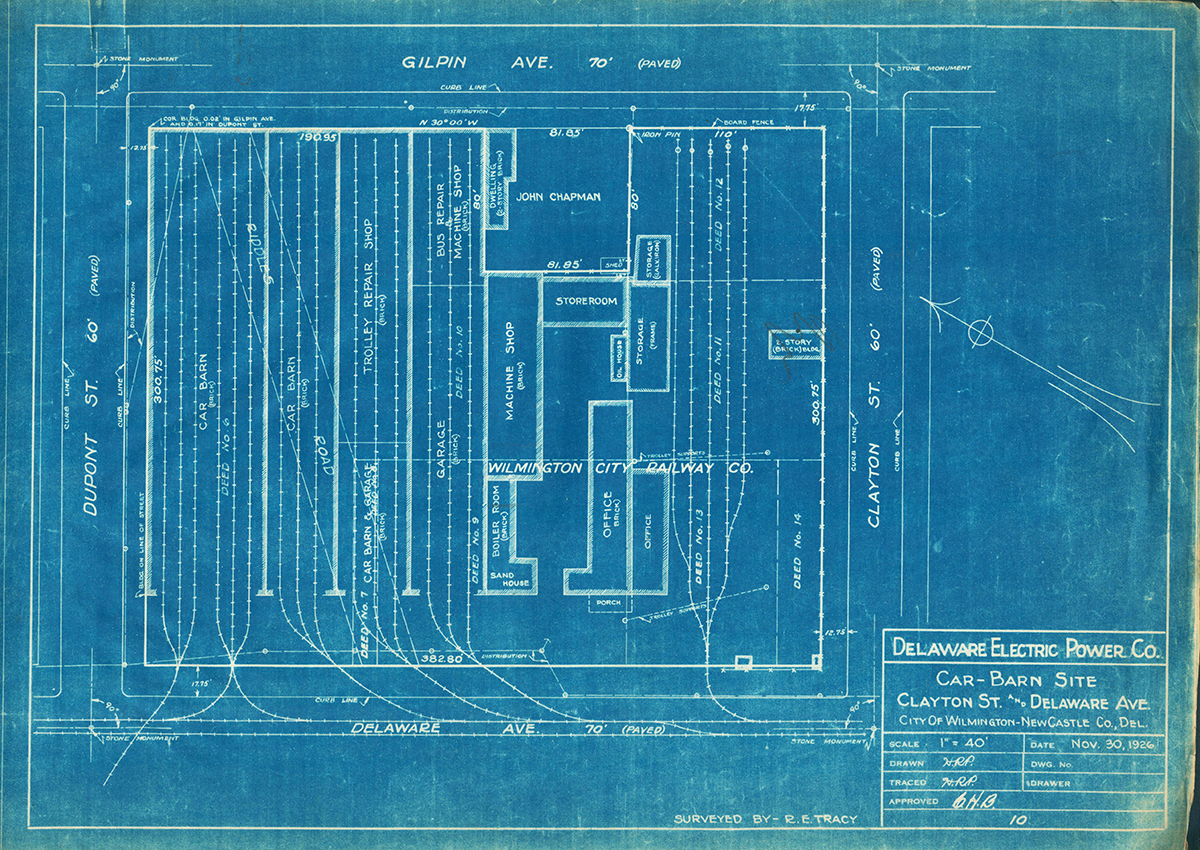 1926 blueprint showing the trolley car barn and shops on what is now the site of the Trolley Square shopping center. View an aerial image of the car barn from 1939

By the late 1800s, Wilmington City Railway extended its lines throughout the city. As Wilmington’s population grew, other street railway companies formed, including the Front and Union Street Railway Co. in 1877 and the Gordon Heights Railway Co. in 1893. In the late 1880s, however, electrification of the street railway system took precedence, and in 1888, Wilmington Street Railway operated its first electric car from the intersection of Market and 10th Streets to the Riverview Cemetery. Front and Union Street Railway followed suit, electrifying their lines in 1889; horse-drawn streetcar operations ended by 1892.

As Wilmington grew, so did its transportation system. Through a series of corporate mergers, the Wilmington City Railway – which still operated the trolley car barn at the corner of DuPont Street and Delaware Ave. – became part of the Wilmington & Philadelphia Traction Company in 1910. In 1915, the company consolidated all of the other small independent lines that operated in Wilmington and Chester, Pennsylvania. By the early 1920s, electric streetcar companies faced increasing competition from automobiles. Buses and trackless trolleys proved more efficient and the Wilmington & Philadelphia Traction Co., which changed its name to the Delaware Electric Power Co. in 1927, began to fade out its trolley systems in favor of gas buses. The company’s car barn at DuPont Street and Delaware Ave. had grown in size over the years and included trolley repair shops, a machine shop, storage rooms, and offices; by the 1930s, it housed both streetcars and buses. The company discontinued all of its electric streetcars in 1940 and changed its name to the Delaware Coach Company in 1942. During the 1930s and early 1940s, rails left in the city streets were removed and scrapped. 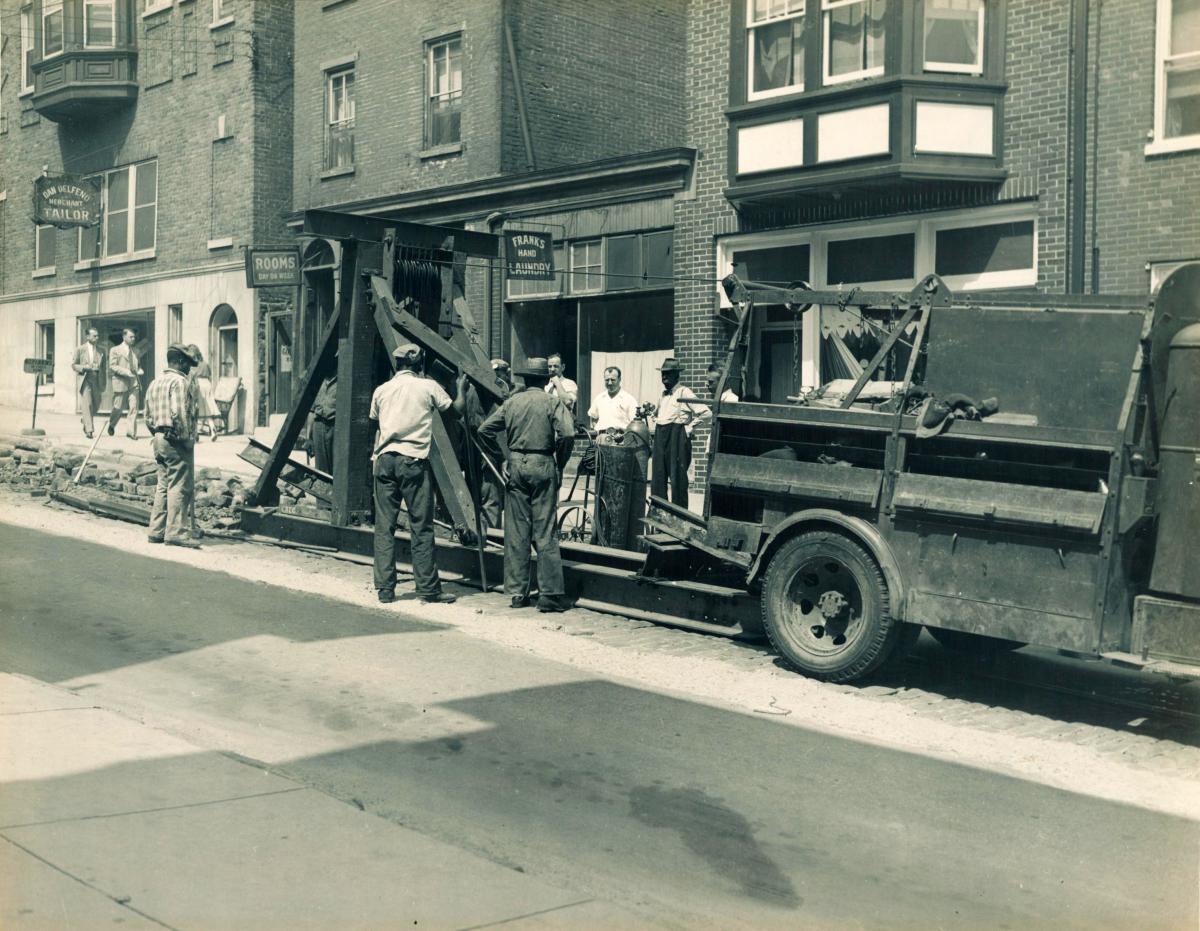 Unsurprisingly, Wilmington’s trolley and bus systems have had a strong impact on the development of the city and its neighborhoods. The Delaware Coach Company records (Accession 1685) document the company and its predecessor electric street railway companies in the Wilmington and Chester areas, and includes route maps, blueprints, minute books, financial and operating statistics, personnel records, and much more. For more information on when the collection will be available for research, please contact askhagley@hagley.org.

Clayton Ruminski is the Archival Specialist in the Manuscript and Archives Department at Hagley Museum and Library.