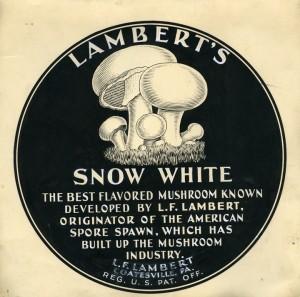 Tucked away in the quiet darkness of the Pictorial Collections stacks, among a thousand other gray boxes, sits an unassuming gray box labeled "Keystone Mushroom Farm Collection." When one considers the many treasures held in the collections here at Hagley, it can be hard to get excited about mushrooms. But, as it happens, the contents of this box tell a very interesting, and little-known, story about how the food industry was forever changed by a little mushroom farm in Chester County, Pennsylvania.

This collection contains photos of the very first cultivated white mushroom, the mushroom from which almost all button mushrooms sold in the grocery store today are descended. That white mushroom was discovered one morning in 1925 growing among a bed of brown mushrooms at the Keystone Mushroom Farm in Coatesville, Pennsylvania. Louis Ferdinand Lambert, the farm's owner and a mycologist by training, brought the white mushroom back to his laboratory, where he selected spores from its cap and cultured then in a sterile medium using a method he had perfected nearly a decade earlier. The result was "spawn," or the living, growing part of a fungus from which mushrooms are produced as "fruit."

When planted in a prepared mushroom bed, Lambert's pure culture spawn would produce only perfect chalky-white mushrooms of uniform size; further, this spawn was especially productive, and produced more mushrooms per square foot than most other strains. Lambert dubbed his new mushroom strain "Snow White," and it was not long before other farmers were buying and planting Lambert's white spawn instead of brown or cream spawn.

By 1933, "Snow White" had become the leading commercial mushroom, and thanks to its high productivity, mushroom farmers were growing and shipping more crops than ever. In 1940 alone, over forty million pounds of fresh mushrooms were produced in the United States. This productivity boom meant that more Americans could purchase and consume mushrooms than ever before, and the mushroom Americans wanted was "Snow White" -- in an era that favored mass-production and quality control, "Snow White's" consistency in color and size appealed to grocers, shoppers, and chefs alike.

Keystone Mushroom Farm's advertising touted that their "snowy buttons are gathered in their prime, and packed vitamin fresh as soon as harvested... [with] no 'wild' or foreign mushrooms." In 1963, independent market research confirmed that housewives preferred mushrooms to be white, uniform in size, and moistly-fresh looking, with color a highly important consideration in the selection of fresh mushrooms. And still, today, consumers buy pure white mushrooms, all thanks to Mr. Lambert's chance discovery of "Snow White." 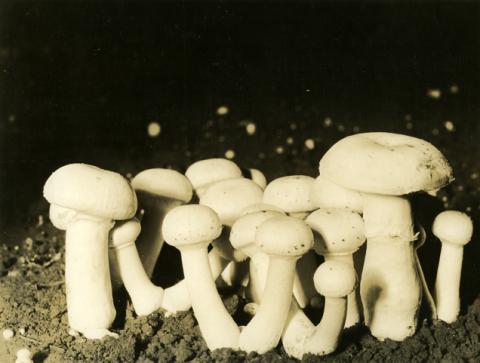 Judy Stevenson is Pictorial Archivist in the Pictorial Collections at Hagley Museum and Library.