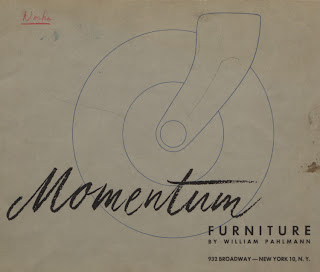 New York-based interior designer William Pahlmann (1900-1987) thought that post-World War II Americans faced some serious problems.  First, he felt that most people, particularly urban dwellers, lived in spaces too small to meet their needs.  Second, they had to figure out how to fit a dazzling array of newly available household technologies (such as stereos, dishwashers, and air conditioners) into their undersized homes.  Finally, and most importantly for Pahlmann, Americans had no idea how to arrange their confined interiors for proper flow and function.

What were growing families to do?  Pahlmann proposed easily movable, multi-purpose furniture as a solution to their dilemma.  He designed a furniture line called “Momentum” which hit the market in 1949.  Items in the “Momentum” catalog, such as chairs and coffee tables, were made of sturdy, lightweight materials and had large, semi-pneumatic rubber wheels so they could be rolled out of the way.  Case goods included plenty of large drawers and fold-out sections that doubled as tables or shelves.

William Pahlmann aggressively marketed the “Momentum” line to American homeowners.  He placed photographs of the furniture in major magazines, issued press releases to newspapers and other media outlets, and created model rooms that incorporated “Momentum” pieces.  Pahlmann enlisted other noted designers such as Dorothy Liebes to fashion custom fabrics and color schemes for The idea behind Pahlmann’s “Momentum” furniture was that anyone, particularly housewives, could effortlessly move or manipulate it.  This made it possible to reconfigure rooms for multiple uses.  For example, one might turn a home office into a dining room or rearrange the den for entertaining guests or watching television.  This versatility enabled families to get the most out of their space, organize their homes according to their needs, and accommodate an increasing number of consumer goods. the line.  He also lectured and gave interviews to promote how “Momentum” furnishings streamlined modern living.

The William Pahlmann Associates Records, available at the Hagley Museum and Library’s Manuscripts and Archives Department, include numerous photographs, product catalogs, and correspondence that document “Momentum” furniture and William Pahlmann’s efforts to get it into the hands of every space-conscious American family.

For more information about the William Pahlmann Associates Records and Momentum Furniture, please contact Lucas Clawson, at 302-658-2400 x319 or lclawson@hagley.org.

Lucas R. Clawson is the Reference Archivist in the Manuscripts and Archives Department at Hagley Library