During the nineteenth century, women made up just 1% of all inventors who received United States patents. Hagley is fortunate to have approximately 80 patent models representing women inventors out of the more than 5,000 models in the collection. Unfortunately, little is known about most of these women but there are exceptions.

For example, Mrs. Harriet Ruth Tracy (1834-1918) was both a prolific and successful inventor. While processing our new Rothschild Patent Model Collection, I was extremely pleased to see that we have her first patent! Born in Charleston, South Carolina, Tracy spent much of her life living in New York before moving to London where she later died after a prominent career as an inventor.

Overall Mrs. Tracy received at least twenty-seven patents during the period of 1868 to 1915. Hagley’s Tracy patent model is for an improved crib-attachment for bedsteads with the objective “to furnish an improved bedstead and crib, so constructed and arranged that when the crib is not in use, and is pushed into its place in the bedstead, the said bedstead and crib shall present a neat and uniform appearance, giving no indication of the presence of the crib-attachment…” 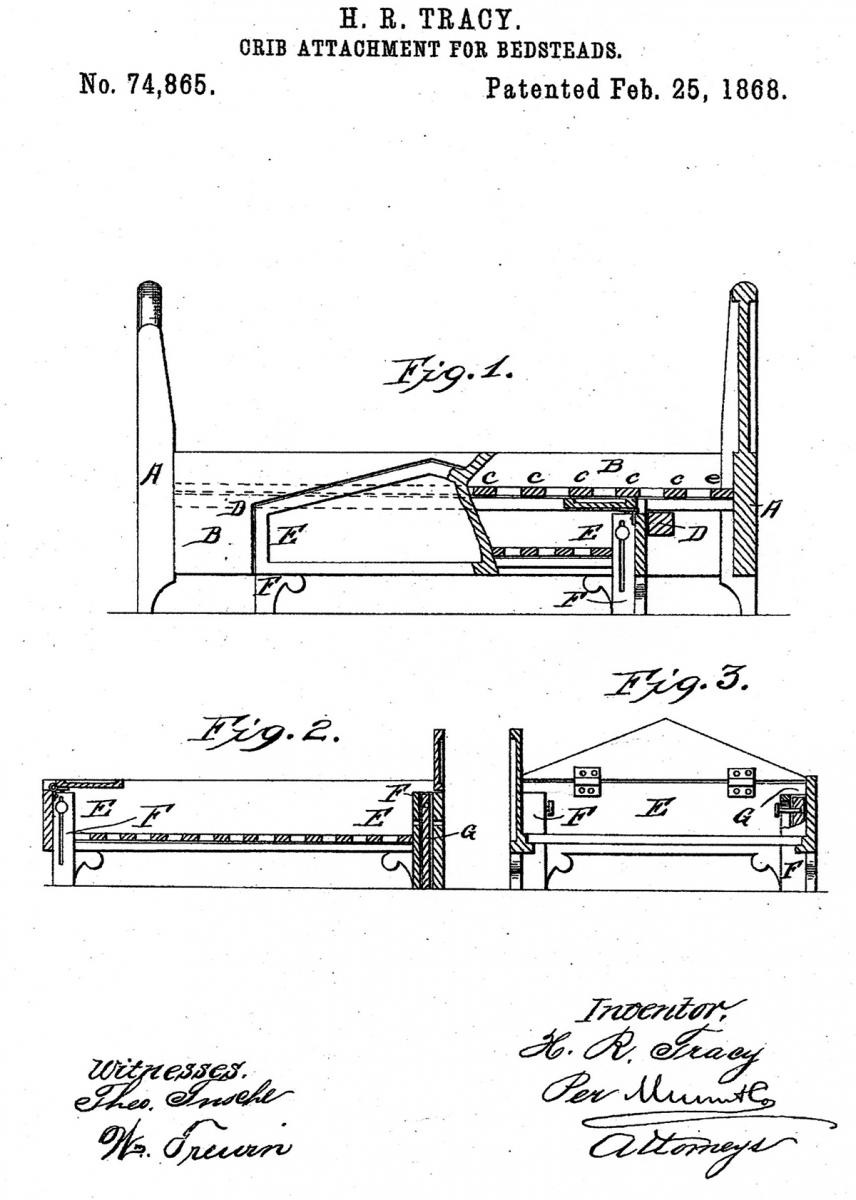 Mrs. Tracy’s prominence as an inventor came not only from her 17 patents on sewing-machines but also her six safety elevator patents. During the 1893 Chicago Columbian Exposition, she displayed her lock-stitch and chain-stitch sewing machine in the Liberal Arts Building. What impressed everyone was her improved bobbin which held up to 1,000 yards of thread hence reducing the number of times the bobbin thread had to be replaced, making it a time saver. Her sewing-machines were used in both domestic and industrial settings.

While her sewing machine was in one building on display, another one of her inventions was installed in the Woman’s Building. The “Tracy Gravity Safety Elevator” was selected for daily use because it had “automatic platforms that keep the shaft constantly closed, and prevent[ed] any person falling through it, or flames ascending it.” It was used to transport visitors to the roof-top restaurant.

Harriet Tracy’s inventions received extensive public acclaim in Chicago newspapers. The Chicago Mail said about her sewing machine: “All ladies who see the machine are delighted with it and her other meritorious inventions are proud that a woman has accomplished what man failed to do….” Tracy spent her life inventing and managing her patents to great success.

If you would like to see patent models invented by women, there is a case exhibit in the Library’s Copeland Room. Please check our Patent Display Information for details.

More can be seen in the museum’s online collection.

Debra Hughes is Curator of Collections and Exhibits at Hagley Museum and Library.