You Bet Your Life (1939) was Cinecraft founders Betty and Ray Culley's first film from start to finish under the Cinecraft name. It was a 30-minute color public service film promoting safe behavior on motorcoaches (later changed in the script to busses) and streetcars. The intended audience was junior and senior high school students. Sponsored by the school committee of the Cleveland Safety Council and the Cleveland Railway Co., the film came to Cinecraft through the advertising agency Fuller & Smith & Ross, Inc.[1]

The need for the film arose from a survey conducted by Cleveland's high schools' student councils as part of a transportation safety contest sponsored by the Cleveland Railway Company.[2] The contest was part of a city-wide general safety campaign headed by Eliot Ness, the city's Safety Director. Ness is best known for his efforts to bring down Al Capone and enforce Prohibition in Chicago. He was the leader of the famous team of law enforcement agents from Chicago nicknamed the Untouchables.

Nearly 400 pupils from 39 Cleveland schools had bit parts in the film. The stars of the film were the Dead-End Kids - Butch, Pinky, and Slats - with cameo appearances by Carl Smith, Managing Director of the Cleveland Safety Council, and H. M. Buckley, Chairman of the School Committee of the Safety Council.

In the original script, the film's name was "Is It Fun or Is It Dumb?" During the movie's production, the name changed to "You Bet Your Life." Cinecraft shot the film on a streetcar equipped with special lights. Locations depended upon finding a section of not-to-busy track near schools. Among the last groups to be filmed were pupils from Wilbur Wright Junior High School on the west side of Cleveland.

On April 20, 1940, more than 300 Clevelanders attended a Cleveland Safety Council luncheon at the Hotel Statler sponsored to acknowledge the Cleveland Railway Company and other organizations that brought Cleveland the title "Safest Large City in America" for the second straight.[5] At the luncheon, You Bet Your Life was awarded a bronze plaque by the Commercial Investment Trust (C.I.T.) Safety Federation, a national automobile sales financing institution, for the most effective institutional motion picture produced in 1939.[6]

The film itself appears to be lost, but Hagley has a script and a production still. Both are available in the Hagley Digital Archives. Click the image to read the full script.... 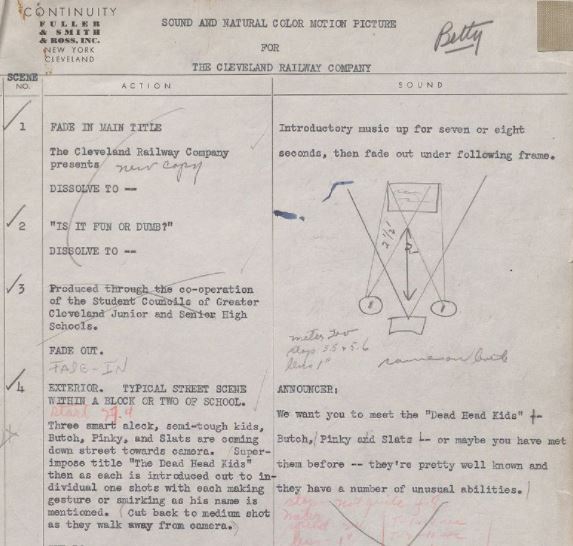 [6] The plaque was presented by A.G. Rude, vice-president of the C.I.T. Safety Foundation, to Frank R. Hanrahan, president of the Cleveland Railway Company. Chevrolet had won the award the previous year for the Jam Handy Organization film, "Knights on the Highway." "Right off the Reel," Business Screen, vol.2 no. 5, May 1940, p. 13.

Jim Culley is a Hagley volunteer researching and writing about the Cinecraft collection. His parents, Ray and Betty, founded Cinecraft in 1939.