The Hagley staff who conducted the Brandywine interviews asked specific questions about the details of daily life.

In response, interviewees recalled their childhood and told stories about parents, relatives, and friends. They remembered sledding and ice skating in winter and swimming in the Brandywine during the summer as well as their more daring and mischievous exploits.

In this series of clips, Brandywine Valley residents recall such memorable events from their childhood.

Rocco Perrone falls through the Ice 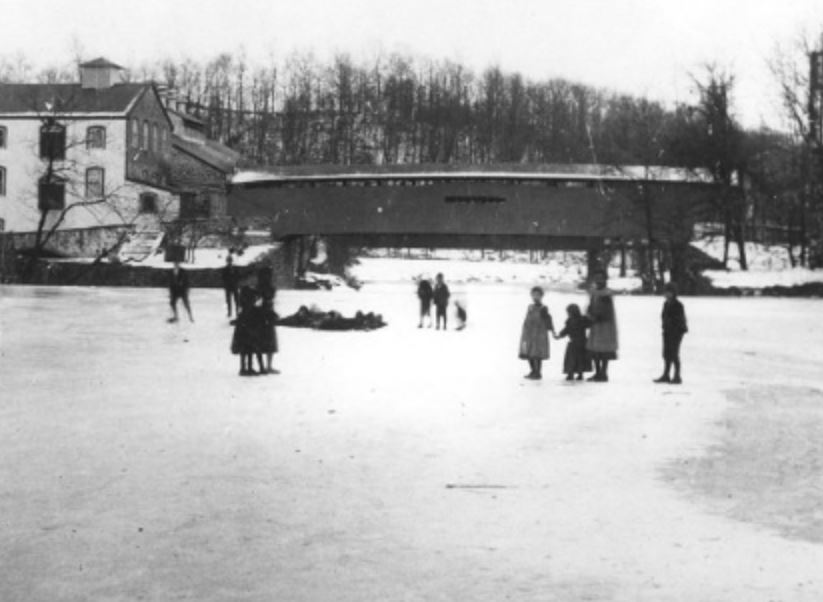 Perrone was born in Italy in 1901. His family emigrated to the Brandywine Valley and his father worked for Colonel Henry A. du Pont as a stonemason.

In this clip,  Perrone shares a story about skipping school and falling through the ice while skating on Evelina du Pont's pond in the winter.

Frazier: Now what time did you get out of school, do you remember that?

Frazier: And did you have work to do after school?

Rocco Perrone: Oh yes, I had to shell all the corn, and feed my roosters and then I had six horses to feed. One time I played hooky, I didn't go to school because I had, like bronchitis, so I told Mom, "I'm going to feed the horses." And I snuck the skates under my overcoat, then I went down to Ms. Evelina du Pont's pond and skated down there with the other boys. And what happened, the ice broke and I went down.

Rocco Perrone: Oh, my Lord. I made a fire, tried to get dried up, but I'd freeze in the front and dry in the back. So it came to me, I went to the neighbors - Frank Rossino - then he moved to - up - what's the name of that place up there - Boothwyn. But he was working for Ms. Evelina du Pont, so his wife said, "Oh, what'd you do, Rocky, did you fall in the water?" "Yeah, and the ice broke." So she gave me a pair of pants from her husband and a shirt and I took my old clothes, when I went home I just hid them.

Frazier: And they never knew you...

Rocco Perrone: Didn't know it right away, but after a while my mother, she found out, because she found the pants and the shirt all getting moldy, you know, they dried up slow. I told her then.

Frazier: You never forgot that, I guess.

Image: Ice skaters on the Brandywine River near Rockland, circa 1900. View image in the Digital Archives 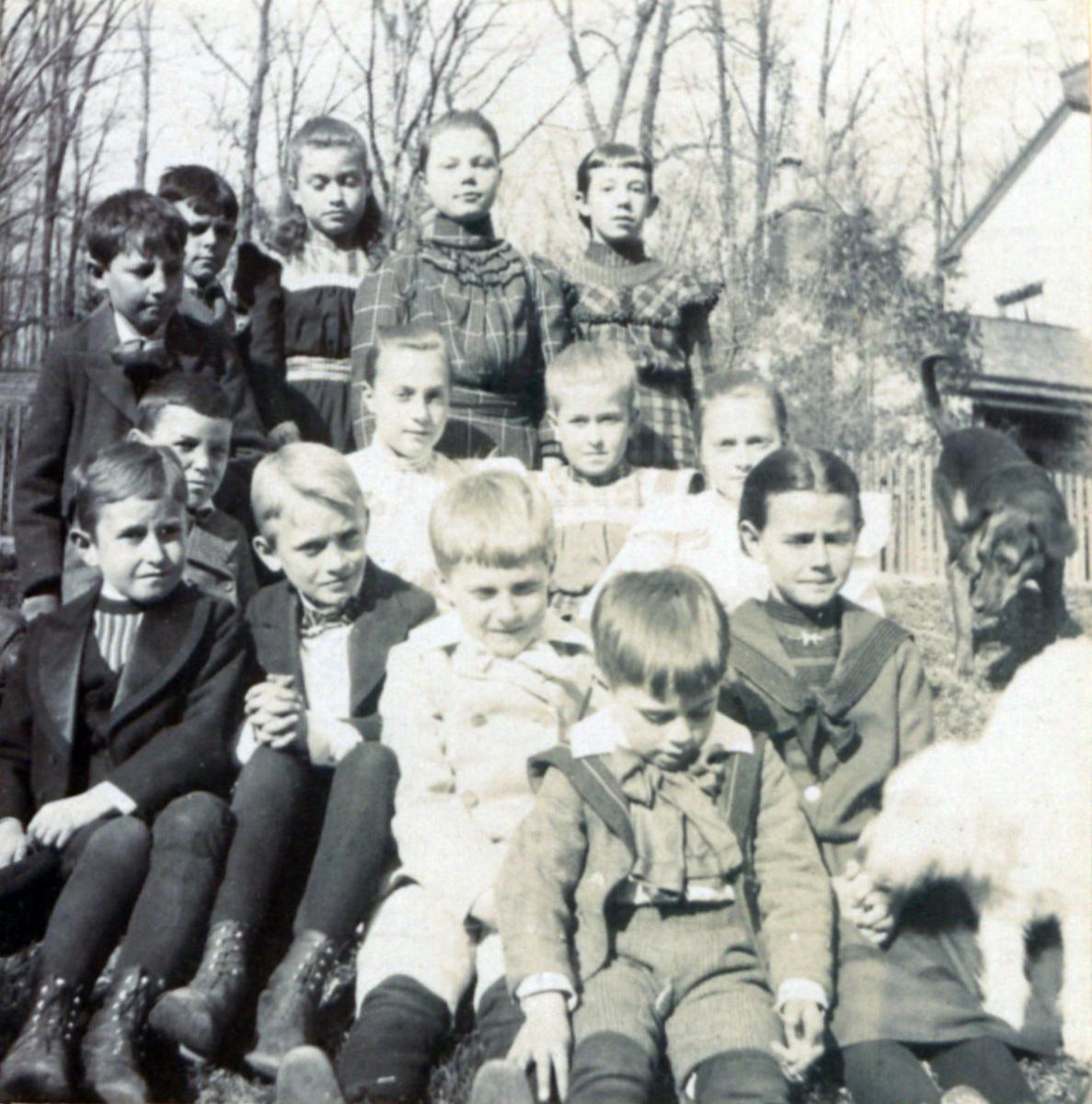 Elizabeth Beacom, born in 1891 to an Irish family, lived in Squirrel Run near the DuPont Powder Yards, where her father worked in the refinery. She worked in the Accounting Department at DuPont for forty-two years, and, after she retired, she became a secretary to Louise du Pont Crowninsheld.

Beacom's old friend Mary Braden Jackson, another interviewee, remembers Beacom being an excellent baseball player as a child and a local ringleader among the neighborhood girls.

In this clip, Ms. Beacom discusses attending, but not quite excelling in, Mrs. Crowninshield's sewing class that met in the Sunday School room at Christ Church.

Well, when she first started it she was Miss Louise du Pont, the Colonel's daughter. She had us children on the Brandywine come up to Christ Church every Saturday morning at nine o'clock and she taught us how to sew. We sat at a long table and she would give us some thread and a needle and some cloth. Then she would come around the table and bend over us and teach us how to sew. One day she came to me and she said, "Bessie, you're the best hemstitcher I have." I thought that was wonderful, so I stopped then, because I thought I was really good.

Well, at the end of the season she came around with prizes and I didn't get any. So, she said, "Bessie, I didn't give you any prize because you stopped. You are not supposed to stop, always in this life you are to try to do better." So, I didn't get any prize. I didn't like that. I went home and my mother agreed with her, so... 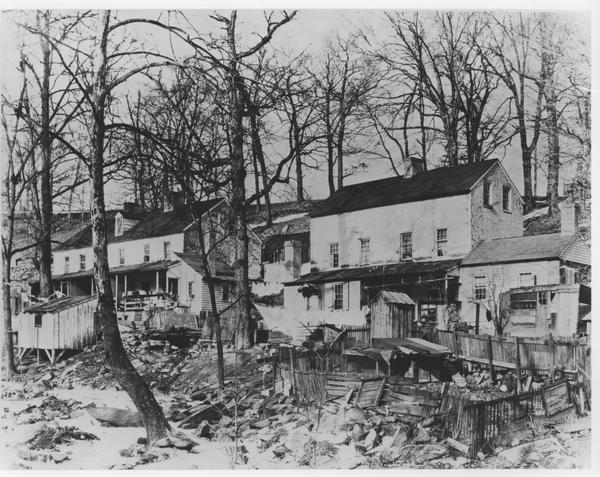 Born in 1895, Jackson grew up in the Brandywine sections known as Chicken Alley, Long Row, and Squirrel Run. Her father, Henry Braden, was an Irish immigrant who worked as a fireman and engineer at Hagley Yards, and her mother, Elizabeth Baxter Braden, was a Scottish immigrant. Raised by her stepmother after her mother's death, Jackson grew up with her five sisters along the Brandywine.

In this clip, Ms. Jackson talks about an annual prank of "throwing over" neighborhood outhouses on the night before Halloween.

Bennett: Did you do any mischief?

Jackson: Yes we did.

Bennett: [Laughter] Let me hear about it.

Bennett: I've heard about that.

Jackson: Old Davy MacAdoo - and I'm telling you he never got over it, and he hated a kid from that day on, you couldn't [write?] anywhere around his yard or his house. They never knew who did it, and my Father used to get on us...

Bennett: Were you there?

Jackson: Yes, of course. And my Father used to watch our outhouse for a long, long time and see that nobody threw it over, but after Father got to bed, I used to tell the gang what time he would be coming up to bed, then they threw the house over. And Pop says, "When in the hell did they do it? For I watched until pretty near midnight." But they knew, because his daughters had told them when he went to bed. I was bad.

Bennett: Talking with Catherine Hackendorn, her dad would turn it over first.

Jackson: Yes, he saved them the trouble.

Bennett: Yes, he turned it over [laughs].

Jackson: Some of them did do that, they turned it over before the kids would.

Bennett: Just in case, but I think that's funny about Mr. MacAdoo.

Jackson: Mr. MacAdoo was in the — we threw it over. My father said, "He didn't know his own daughters had anything to do with it. If I ever knew any one of my children had done it," he was sure his children didn't do it." He said, "I'd cut the legs from under them." He never knew it was our legs that did it.

Image: Houses and yards on Squirrel Run adjacent to the DuPont Company Powder Yards, circa 1910. View image in the Digital Archives 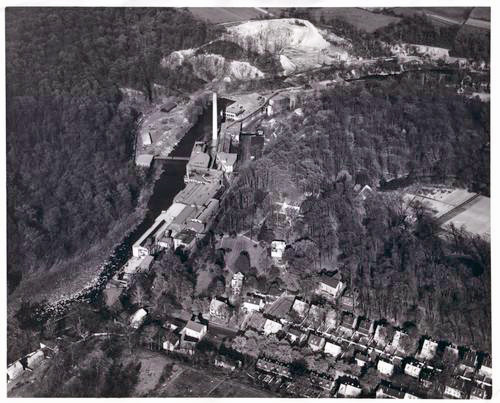 Hallam's father and grandfather worked at Bancroft Textile Mills in Wilmington. He grew up in the Rockford area on Ivy Road adjacent to Bancroft's operations on the Brandywine. He was interviewed along with his mother in 1980 and talked about his childhood in the 1940s.

In this clip, he speaks about a harrowing but humorous prank played on a new arrival to his neighborhood.

..some of the typical teenage pranks I guess. They'd pick a nice summer night and in the Rockford area you had fairly high fences between all the backyards, you know, it was typical, all fenced in, both front and back yards. The front yards were all the wrought iron kind, and the back yards were wood. So they would wait until there was a nice hot summer night and people would all be out on the porches, and they would get a hold of a policeman's uniform somehow or another, or a couple of them, and they'd start at one end of Rockford, and a couple of kids would be the crooks and a couple would be the cops and they'd come down through the back yards over all the fences and by the time they hit the other end of the little village, why everything was stirred up. They were typical of teenage pranks, but that was probably all you had to do, moneywise. There wasn't much else you could do.

Let's see, what are some of the other ones that they pulled. They would always initiate a new boy into the group by taking him across the Brandy- wine, and they would go on up into the Alapocas Woods, and the would have some one of the group hidden up in the woods dressed as the farmer with a shotgun. And they'd be going up to steal some- thing from the farmer's field, I guess, because by the time they would come up into the farmer's field, this one with the gun would start chasing them. And they'd, of course, make their mad run down through the woods with the poor Victim not knowing what was going on. When they got down to the Brandywine area whoever had the shotgun would fire a couple of shots and two or three of them would fall over and roll down and into the water like they were dead. They pulled all those kind of stunts growing up.

Image: Aerial view of the Bancroft Mills and Rockford neighborhood on the Brandywine River in Wilmington, 1931. View image in the Digital Archives 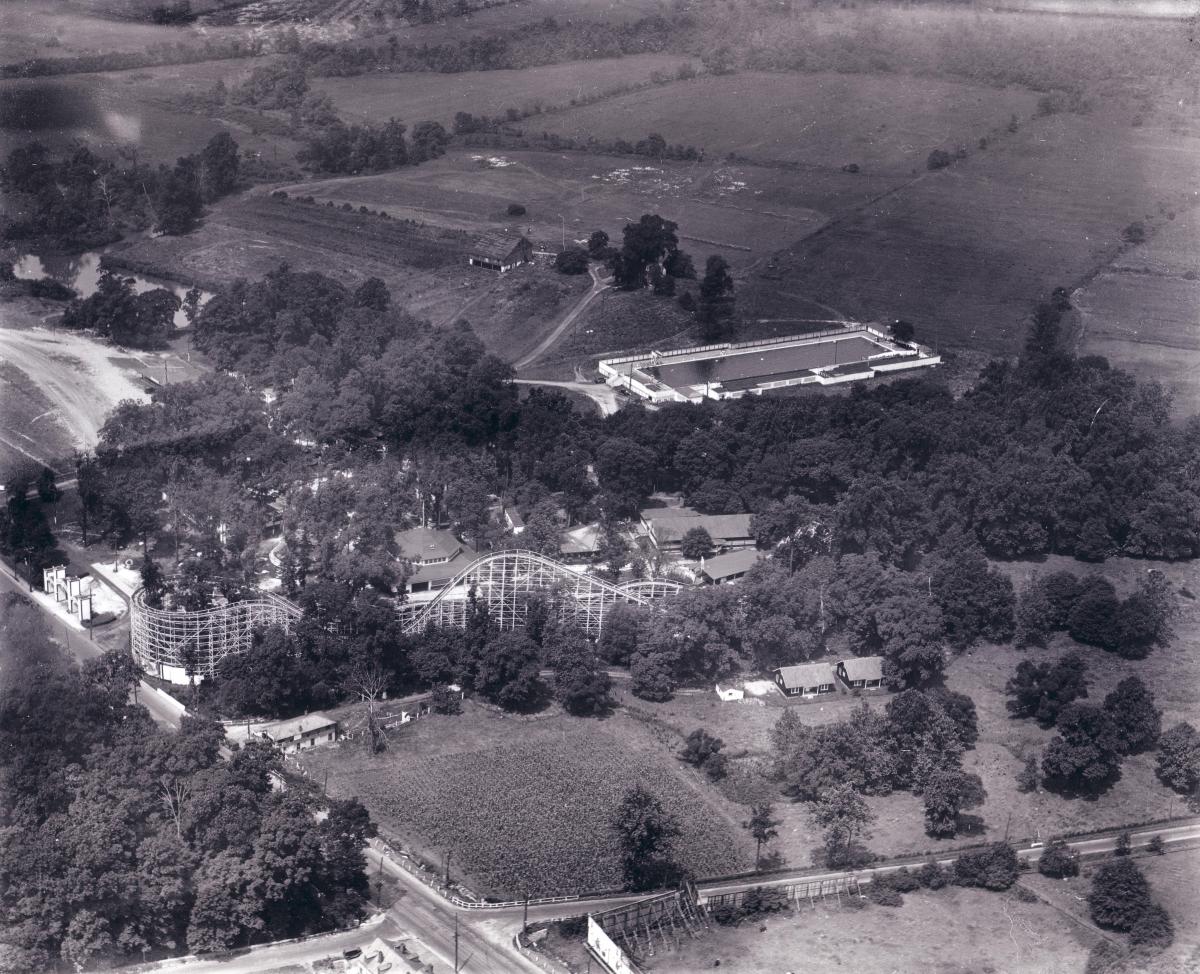 Ella Fitzharris's grandparents immigrated to America from Ireland. Born in 1911, Fitharris's father worked for DuPont in the powder mills and later the experimental station. Her family lived in a home near Walker's Mill.

In this clip, she talks about a circus in Wawaset Park and amusement parks at Brandywine Springs and Shellpot Park.

Lotter: Did they? How about amusement parks?

Lotter: I bet it was.

Fitzharris: Do you know where it is now?

Lotter: Yes I do.

Fitzharris: You would get on the trolley, like at the bottom of Breck's Lane and go down through the woods and you went in the City, I don't know, around Sixth Street someplace, then you would get a bus, I mean a trolley, and go out to Brandywine Springs. How it went, I don't know, but I know we used to get it. We mostly went to Shellpot because that wasn't quite so far, that was where Sears is, you know out there.

Fitzharris: But that was the main one we went to - Shellpot. That would be a whole day's...

Lotter: What kind of rides do you remember?

Fitzharris: I remember like a scenic railway, merry-go-round, and boats, they had the boats - that's about all I guess. Then they had chances on different things, kewpie dolls were the prizes most of the time, you know.

Lotter: Oh yes. What about - you mentioned about going to Riverview Beach, do you remember any other beaches?

Fitzharris: No, there was excursions, like the grocers had the excursions to Riverview. Man that had the grocery store, Gregg?

Fitzharris: He used to get the tickets for us and then everybody would go. And of course Alfred I. du Pont, he used to take the men and their wives on a boat trip once a year. And I don't know whether that just went to Riverview or where, but he would have them all lined up and take pictures of them. My Dad never went, but I remember quite a few of the people that did.

Lotter: U-huh. Do you remember any circuses or carnivals?

Fitzharris: No, but I remember before - what's that place - Wawaset Park?

Lotter: That's right, they do.

Fitzharris: But then right after that...

Lotter: Made a big impression.

Fitzharris: And after that they started to build the houses there, what year that was, I don't know, but I remember going down there with my Dad to the circus.

Lotter: What do you remember about the circus, anything?

Fitzharris: I just remember a lot of horses there, but that's about it. But the thing that - I just can't get over that thing that stuck with me about the straw, drinking off it. 'Cause we just drank out of a glass, you know.

Image: Aerial view of the amusement park at Shellpot Park, 1927. View image in the Digital Archives