The following text is from the official exhibit booklet that accompanies the Nation's Business exhibits on display at the Chamber of Commerce headquarters in Washington, D.C. and the Hagley Museum and Library in Wilmington, DE: 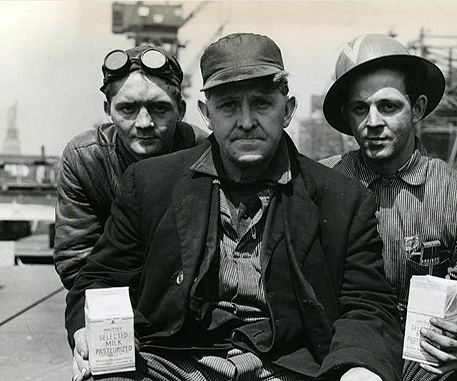 One hundred years ago, on April 22, 1912, 700 representatives of American business gathered in Washington, D.C. President William Howard Taft spoke to them, requesting that businesses form a national group to advise the government on issues facing industry and business throughout the country. The Chamber of Commerce of the United States of America was formed. Today, it is the world’s largest business federation representing the interests of more than 3 million businesses of all sizes, sectors, and regions, as well as state and local chambers and industry associations.

The organization grew quickly. One of its earliest projects was publishing a monthly magazine, Nation’s Business. From its first issue, published in September 1912, the magazine proved invaluable in communicating the Chamber’s messages to business and government. Printed originally in newspaper format, and then as a magazine, its circulation increased dramatically in just a few years. Illustrations played an important part in the design. Nation’s Business used images by many of the country’s most prominent photographers until publication ceased in 1999. Today, the Chamber uses all modes of communication, reaching an ever-increasing audience through the Web, television, radio, and social media.

The pictures in this booklet are samples of the images available in the Chamber of Commerce of the United States collection at Hagley Museum and Library in Wilmington, Delaware. Most of the pictures come from the files of Nation’s Business photographs. The magazine used the works of many well-known photographers, including Margaret Bourke-White, Lewis Hine, André Kertész, and Dorothea Lange. In addition, it used works by anonymous corporate and commercial photographers, as well as photographs from U.S. government agencies, such as the Soil Conservation Service and the Office of War Information.

Many of the prints show the crop lines indicating the portion of the image that the editor wished to reproduce in the magazine. Editors often had to alter images to suit the layout of the page or to better illustrate the content of the article. The most recent images in the collection are digital photographs, an indication of the revolution in photography that has changed not only the work of editors but also the tasks of archivists. 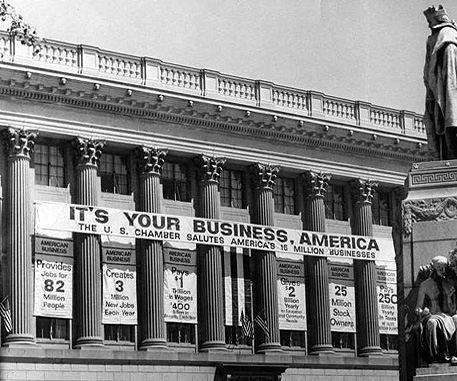 Publication of Nation’s Business began during the period of the birth and development of the American magazine. The first two decades of the twentieth century saw the introduction of mass market publications, including McClure’s Magazine, The Saturday Evening Post, and Ladies’ Home Journal. Nation’s Business was a pioneer, focusing specifically on business-related articles and illustrations.

The period from 1920 to the late 1950s has been called the golden age of the American magazine. Circulation of Nation’s Business continued to grow, and new stylistic formats with colorful covers and more and more photographs and charts illustrating stories on a wide range of topics were adopted. In the 1950s, the magazine even published short fiction by up-and-coming authors such as Ray Bradbury. The success of Reader’s Digest (1922), Time (1923), and especially Fortune (1930) provided competition. Life magazine’s introduction in 1936 raised magazine illustration to a whole new level, and Nation’s Business responded by seeking more striking images from America’s great photographers.

Television became the largest competitor to mass market magazines, siphoning off advertising and readership. Life, Look, and The Saturday Evening Post all ceased publication by 1972. The growth of the Internet in the 1990s spelled the end for even niche market magazines, and Nation’s Business ceased printing in 1999.

Since 1992, Hagley Museum and Library has been the home of the archives of the Chamber of Commerce of the United States. Hagley Library is the nation’s leading business history library, archives, and research center. More than 37,000 linear feet of archival records, close to 300,000 printed volumes, and some 2 million visual items document business and industry from colonial America to the present day. In addition to the Chamber’s papers, the library houses collections from Avon Products, the DuPont Company, MCI, the Pennsylvania Railroad, PSFS, Joseph E. Seagram & Sons, Sperry Gyroscope and Sperry-Univac, and Sun Oil. The library has more than 220,000 digital items searchable and available in its online archive at http://digital.hagley.org, where you can find material from this exhibition as well as a complete run of Nation’s Business.