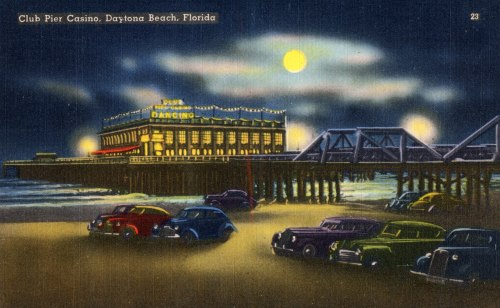 On this date in 1822, the U.S. Congress merged the recently seized territories of East Florida and West Florida into the Florida Territory. The region would later become the U.S.'s 27th stateon March 3, 1845.

Much, much later, on May 29, 1941, the state would become home to the Club Pier Casino in Daytona Beach. This undated postcard described the pier as having been" famous a decade for fishing, now a Public Club Casino. Dining, Dancing, etc., it is still an Angler's Paradise".

This postcard comes from Hagley Library's collection of Postcards of motels, roadside attractions, restaurants, etc. in the United States (Accession 2007.214). This collection comprises 130 postcards dating from approximately 1930 to 1960. The postcards depict motels (including motor courts and cabins), restaurants, roadside attractions, and scenic views from across the United States. To view it online now, click here.