How are you feeling about your windows this #ThursDIY? 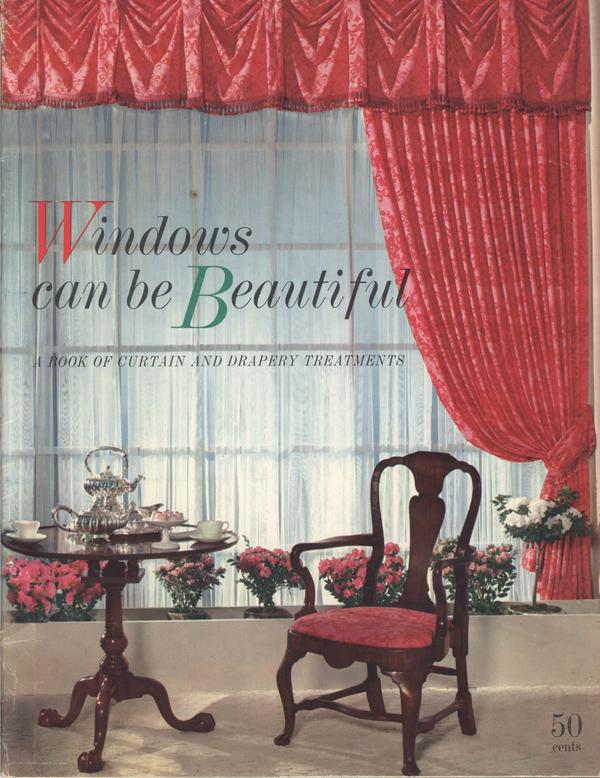 How are you feeling about your windows this #ThursDIY? If you could use a little more beauty in your life, maybe this ca. 1960 guide to window treatments is just the thing you need.

Created under the aegis of Mary L. Brandt, General Manager of the Stanley Drapery Hardware division of the The Stanley Works company, the guide featured curtains made of Everglaze fabric by the Joseph Bancroft & Sons Co. textile company. It is now part of Hagley Library's Joseph Bancroft and Sons Company, Miss America collection (Accession 1972.430).

The company's namesake, Joseph Bancroft (1803-1874) began manufacturing cotton cloth using traditional British spinning and weaving technology at a small mill in Rockford, Delaware, just north of Wilmington, on March 25, 1831. The mill was built along the Brandywine River in order to take advantage of the river's water power.

The firm expanded steadily during the 1830s and 1840s as it began to produce cotton for both the Philadelphia and New York markets. In the late 1840s, Joseph Bancroft brought his two sons William (1825-1928) and Samuel (1840-1915) into the business, assuring that the company would remain a family enterprise.

In 1910, the company bought an additional property in Reading, Pennsylvania. They consolidated their manufacturing operations at the new site and used the entire Brandywine plant for bleaching, dyeing, and finishing processes. By 1930, Joseph Bancroft & Sons Co. was the largest cotton dyeing and finishing works in the world, and by the mid-twentieth century, the last remaining textile industry on the Brandywine.

In 1929, the Bancroft Company merged with the Eddystone Manufacturing Company. In the mid-1930s it began producing a line of rayon goods and a cotton finishing process that were marketed under the trade names of "Ban-Lon" and "Everglaze" respectively. The Banlon and Everglaze processes were widely licensed in Europe and America and by the early 1950s foreign royalties accounted for more than seventy per cent of the firm's total profits. In 1961, the Bancroft Company became a division of Indian Head Mills, Inc., of New York City. The Rockford factory closed in 1981.