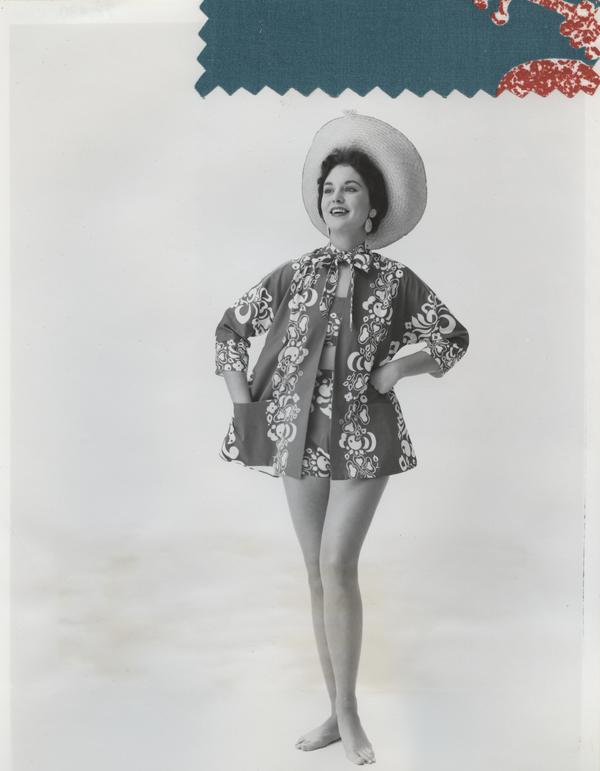 Today's #FashionFriday brings us a beach ensemble. This jaunty look was designed by Balboa using Joseph Bancroft & Sons Co. Everglaze Minicare fabric in a print by Textile Corp. of America, with an attached fabric sample. This 1956 photograph is from Hagley Library's Joseph Bancroft and Sons Company, Miss America collection (Accession 1972.430).

The firm's namesake, Joseph Bancroft (1803-1874) began manufacturing cotton cloth using traditional British spinning and weaving technology at a small mill in Rockford, Delaware, just north of Wilmington, on March 25, 1831. The mill was built along the Brandywine River in order to take advantage of the river's water power.

Bancroft's business expanded steadily during the 1830s and 1840s as it began to produce cotton for both the Philadelphia and New York markets. In the late 1840s, Joseph Bancroft brought his two sons William (1825-1928) and Samuel (1840-1915) into the business, assuring that the company would remain a family enterprise.

In 1929, the Bancroft Company merged with the Eddystone Manufacturing Company and soon after, it began producing a line of rayon goods and a cotton finishing process that were marketed under the trade names of "Ban-Lon" and "Everglaze" respectively.

In an effort to promote Everglaze, Bancroft became a primary sponsor of the Miss America Pageant from the mid-1940s through the late 1960s. The company helped finance the pageant and provided money towards scholarships awarded to pageant winners. Bancroft was able to promote its products using the image of Miss America.

The collection largely consists of general advertising and product information for "Ban-Lon" and "Everglaze" fashions. In particular, the collection documents the Joseph Bancroft & Sons Company's sponsorship of the Miss America Pageant and the promotion of fabrics by Miss America from the years 1953 to 1967.

More images from this collection, along with images from our Joseph Bancroft and Sons Company photographs (Accession 1969.025), can be found online in our Digital Archive by clicking here.