You may have known that the Victor Talking Machine Company was a pioneer in the fields of sound recording and phonograph manufacturing . . . 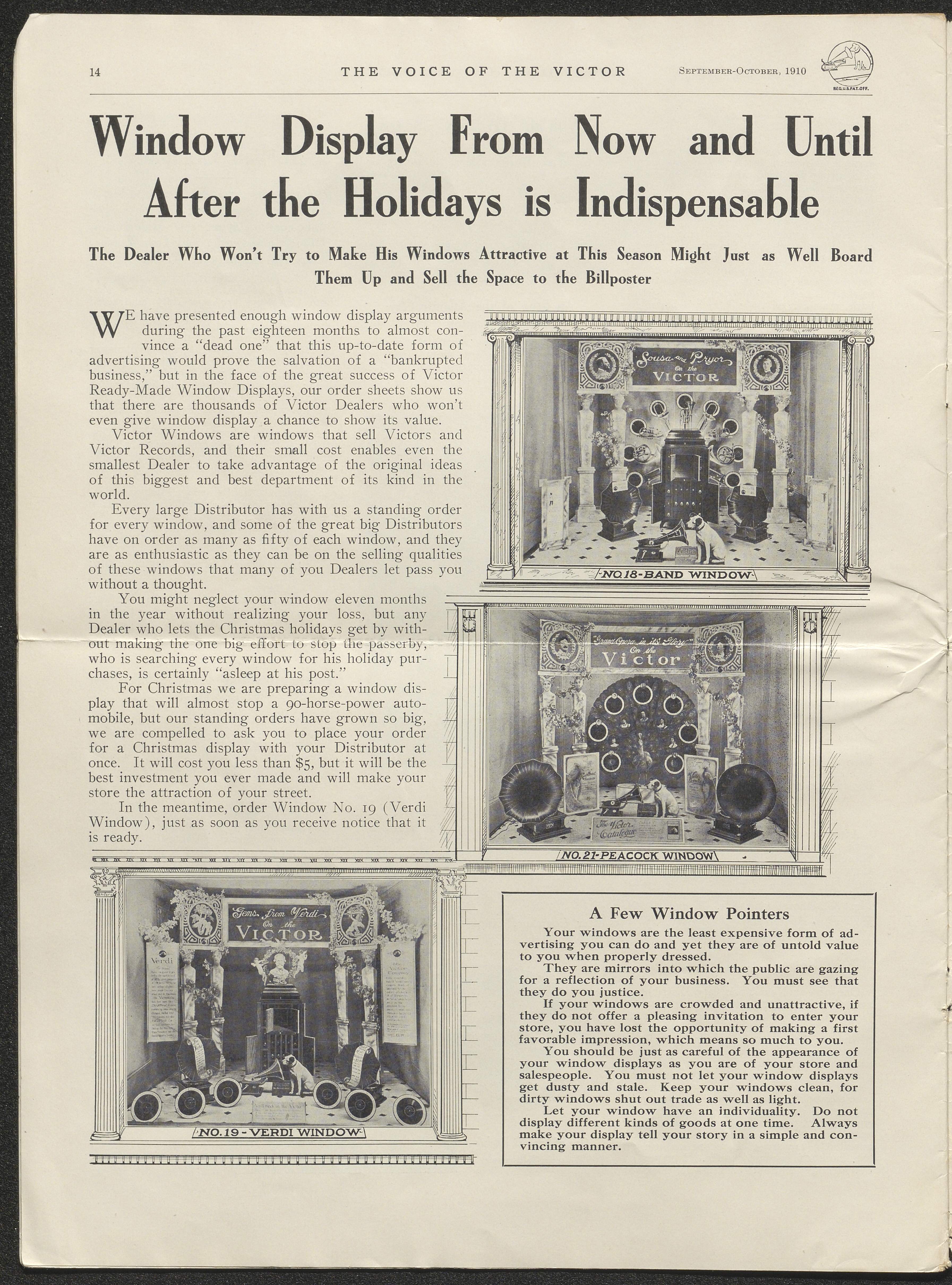 You may have known that the Victor Talking Machine Company was a pioneer in the fields of sound recording and phonograph manufacturing . . . but did you also know that they were early adopters in the field of Christmas Creep?

This page is from a September/October 1910 issue of The Voice of the Victor, the company’s newsletter. It advertises the company’s Ready-Made Window Displays for store windows and urges stores owners that distribute Victor products to adopt these displays in advance of the holiday shopping season.

The Victor Talking Machine Company was an American phonograph record company. In 1901, Eldridge Reeves Johnson (1867-1945) combined his patents with those of Emile Berliner (1851-1929), who received a U.S. patent for the gramophone, the first commercially available flat disk playing phonograph.

In 1895, Berliner and a group of investors started the Berliner Gramophone Company. Berliner's design improved on the phonograph invented by Thomas Edison (1847-1931) in 1877 as it allowed for ease of duplication from a master recording, but the hand-cranked gramophone could not maintain constant speed and pitch while playing.

In 1896, Johnson, a machinist from Camden, New Jersey, developed a spring motor for the Berliner gramophone and began to produce motors, sound boxes and metal parts for Berliner Gramophone. When Emile Berliner underwent legal difficulties, Johnson decided to adopt a brand name and distribute his own gramophones.

In 1900, Eldridge Johnson formed the Consolidated Talking Machine Company with Leon F. Douglass (1869-1940), but it would be short lived. In 1901, Johnson combined his patents with those of Emile Berliner, incorporating the Victor Talking Machine Company in Camden, New Jersey and adopting the "His Master's Voice" trademark from Berliner.

The Victor Talking Machine Company increased in success by signing Enrico Caruso (1873-1921) and John Phillip Sousa (1854-1932) among others to recording contracts, by introducing the Victrola with its enclosed horn in 1906, and by improving recording technology.

The company continued to expand into the 1920s, when sales began to flatten with the popularity of radio. In 1929, the Radio Corporation of America purchased the Victor Talking Machine Company, becoming the RCA Victor Company.

This item is call number f TS2301.P3 V64 in Hagley Library's published collections. You can view it in full in our Digital Archive by clicking here.