It’s About Time: A New Perspective on Chronological Files

In today’s article, rather than highlight a specific topic or item, I decided to discuss an entire series, or grouping of materials. When the National Association of Manufacturers collection first came to Hagley in 1973 it had two large chunks of material – what today is Series I and Series II. These files were maintained across all departments and offices in one central location, however, they were maintained in two very different ways. Series I is arranged thematically or topically. For example, awards, NAM policy committees, radio and TV, and women’s clubs. Series II is arranged chronologically, covering 1947 to 1973, with each item being given a unique number. For instance, 64-106 would be the 106th item from 1964. The NAM maintained a card catalog to make the chronological files accessible (below). Without these index cards, it would be nearly impossible to find the document you are looking for. 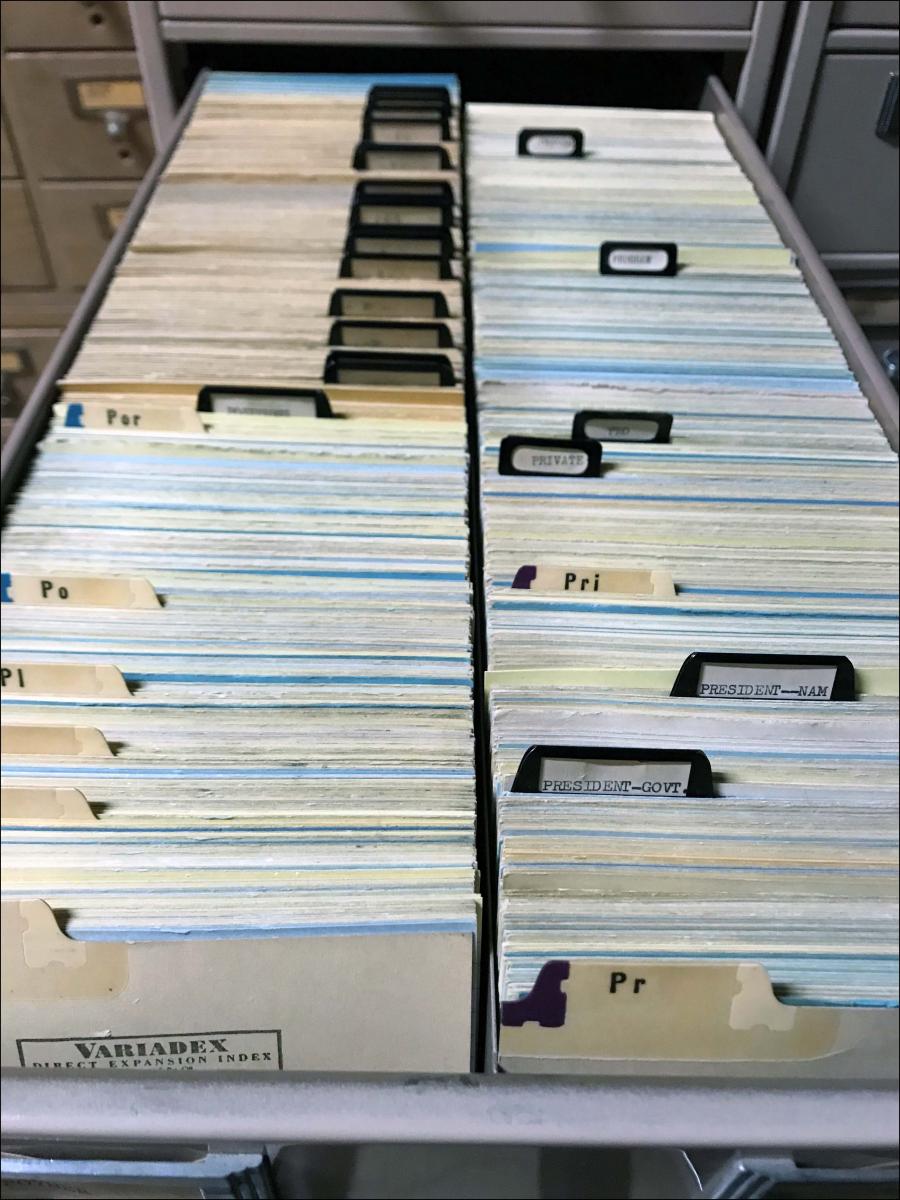 Until now, Series II has essentially been inaccessible since the card catalog has not been available to researchers. When the collection re-opens later this year, Series II will once again be available with greater accessibility. “You keep mentioning greater accessibility, but what does that mean and how will you do it?” The card catalog has been rehoused from metal drawers to archival boxes that researchers will be able to request and search themselves.

There are a couple specific things I want to draw potential researchers’ attention to with the card catalog. The first is it will allow researchers to look up a specific name or format, rather than just topic (although that is also included). For example, in the photo below we see three different cards related to Ronald Reagan. One refers to an interview (57-991), while the other two will lead to speeches. It is also important to bear in mind that the chronological files only go to 1973 – 1974 and more recent are found in other series – therefore material from Reagan’s presidency will not be found here. 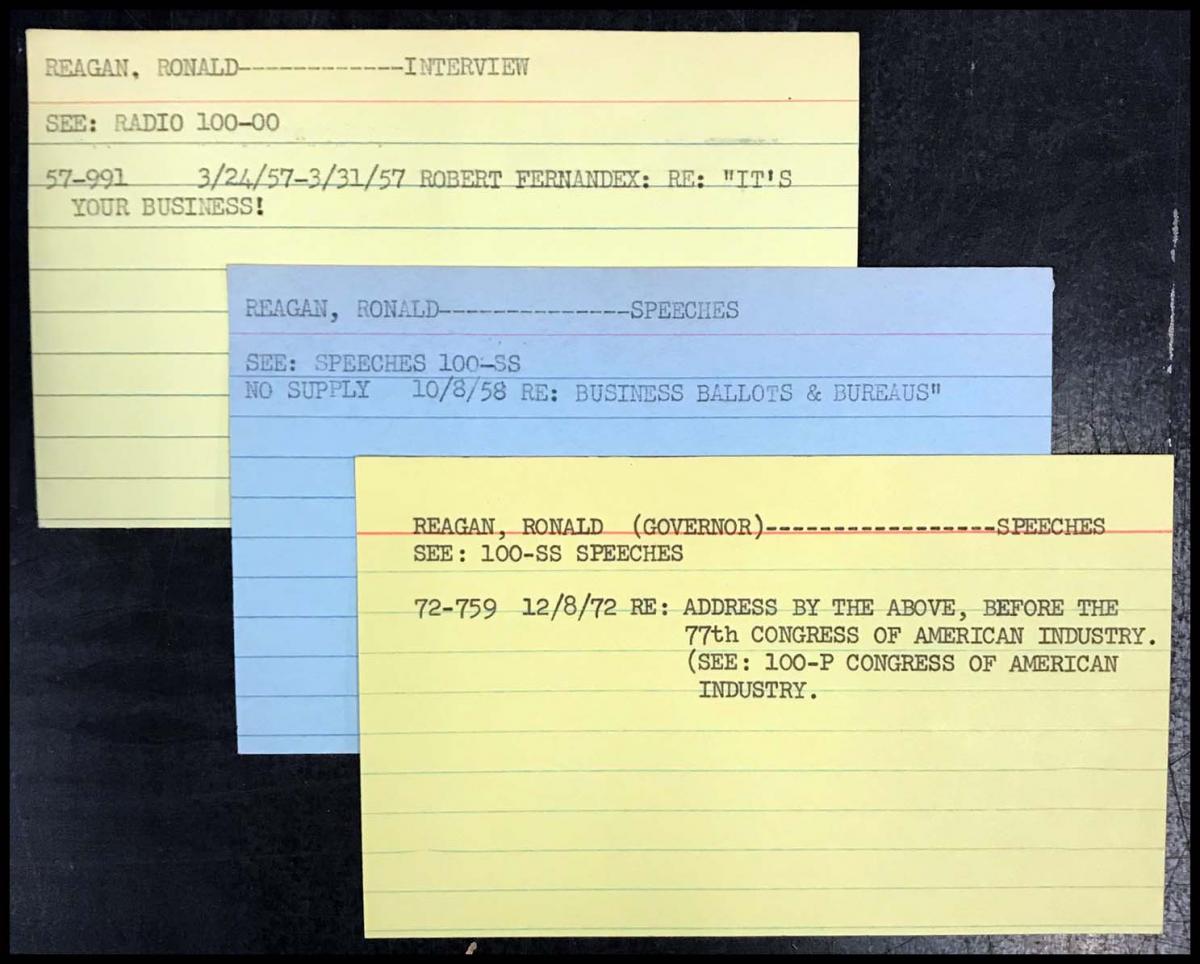 The second thing I want to mention is that most items are cross-referenced on multiple cards. In the photo below, we see “The customer will be boss” address given by Everett R. Smith in 1945 has a card for both the speech title and speaker’s name. Both cards also suggest looking at “Speeches – Smith, Everett R.” The Smith card lists two additional speeches given by Everett, which researchers could then look up and find in the chronological files. 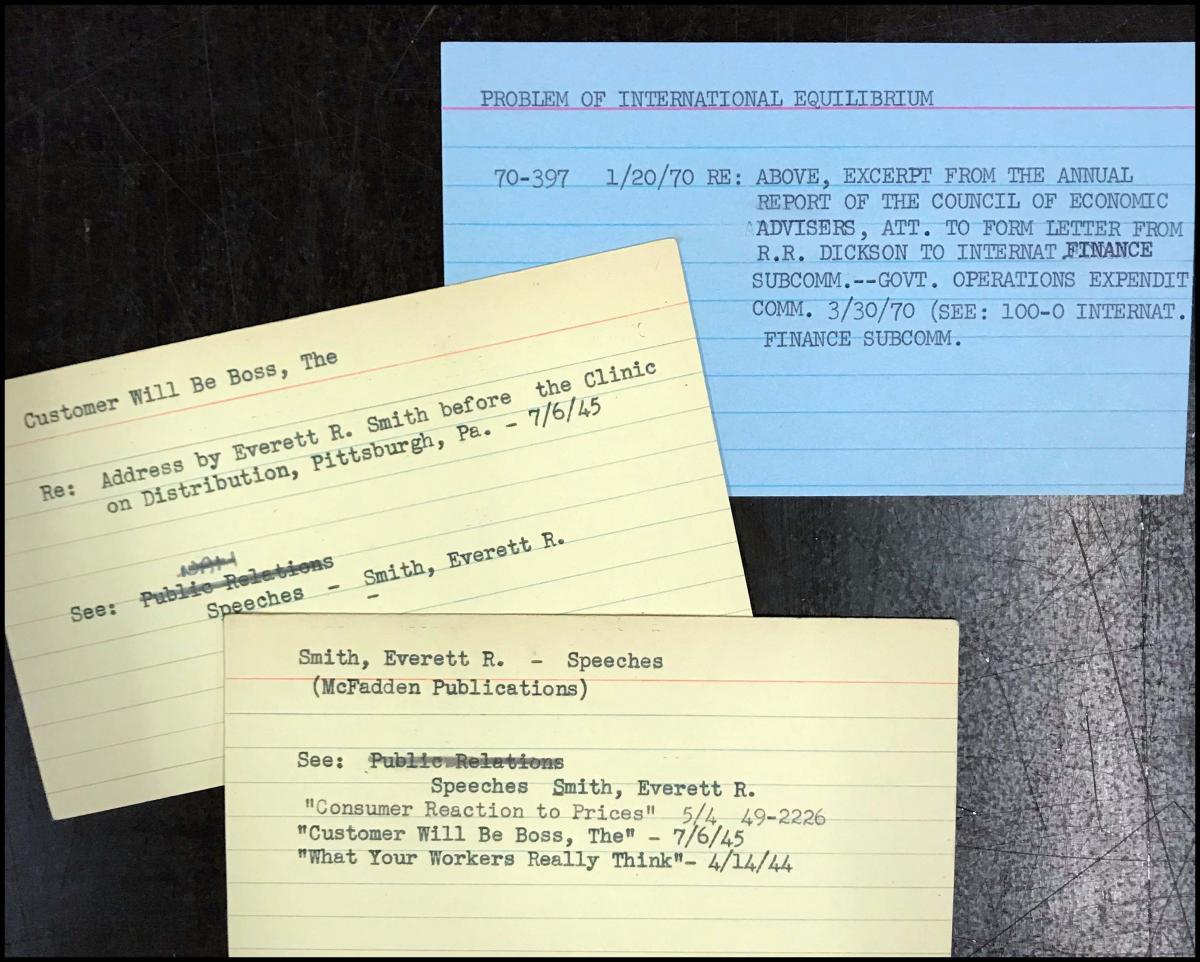 My hope is that by gaining intellectual control over Series II, the material will be better utilized by researchers. The work and willingness to dig is still on the researchers, but we are providing a better ability to do that. And, perhaps when the question of “my grandfather spoke at a NAM meeting in 1956, do you have a copy of his speech?” arises, we will have a higher probability of finding it…as long as it happened before 1973.