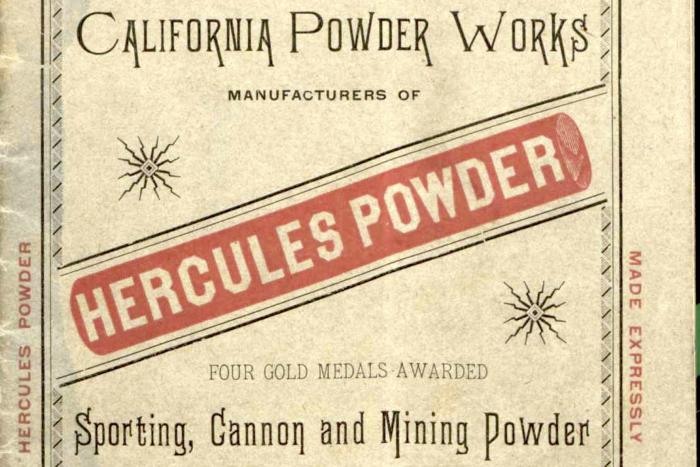 This paper traces the western origins and eastward expansion of the U.S. high explosives industry, a key segment of the chemicals sector.  California capitalists created the incipient dynamite industry in order to “unlock” the Sierra’s plentiful but stubborn natural resources.  They collaborated with Alfred Nobel, pioneered dynamite manufacturing in San Francisco, clustered factories in metropolitan Oakland, and built branch plants in New Jersey and Ohio—all before any eastern manufacturer began notable production.  In doing so, California technology shaped the national industry de novo.  Nowhere is this better demonstrated than in the influence of California firms on the organization and operation of Du Pont.  California corporations developed the knowledge and know-how, and engaged in the competition and collaboration, that enabled Du Pont’s entry into dynamite manufacturing and initial consolidation of the industry.

This paper also seeks to contribute to a more nuanced incorporation of California into the narrative of national economic growth during the “second industrial revolution.”  The case of dynamite belies conventional explanations of California’s growth based on facile plunder of natural resources or utter dependence on eastern capital.  Dynamite is one example of the innovative industries that developed in service of resource extraction in California, spread eastward, and influenced broader patterns of U.S. industrialization.  The reciprocity between resource extraction and industrial dynamism in California elucidates broader aspects of technological advance.  Specifically, this paper argues that technological innovation was not only a historical and cumulative process but an inherently geographical and spatial one, as well.

Seth Lunine is a lecturer in the Department of Geography at the University of California–Berkeley, where he received his Ph.D. in 2013.  He is currently working on two projects.  The first, Sin Suburb: Manufacturing Vice in Emeryville and the San Francisco Bay Area, combines urban and economic geography to study the role of industrialization in both regional capitalism and metropolitan growth.  The second, from which this paper derives, focuses on the early high explosives sector and specialized Bay Area corporations depict the decisive but overlooked role of innovative industries in not only California’s development but also in broader patterns of U.S. economic expansion during the late-19th century.

D. C. Jackson of Lafayette College will give the comment.

Attendees are encouraged to read Lunine's paper, “Groundbreaking Technology: California Dynamite and the Eastern Frontier, 1866-1886,” which may be obtained by contacting Nicole Mahoney at nmahoney@hagley.org.