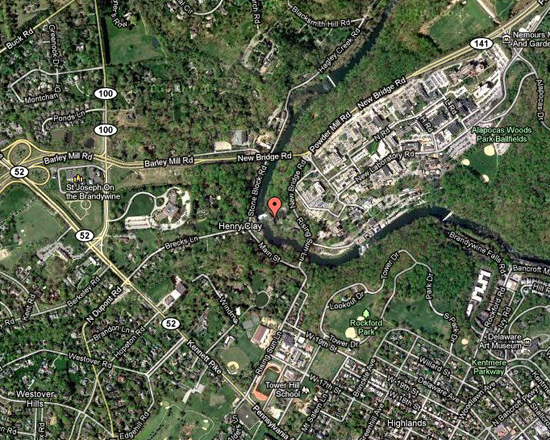 Summary: Joseph B. Sims built Simsville Mill, later known as Walker's Mill, after purchasing land from Peter Bauduy on August 14, 1813. Soon after, Sims leased his newly built factory to John Siddall & Co., a partnership that included members of three families. The Thorps and Siddalls were calico printers from Philadelphia, while the Hodgsons ran a machine shop at nearby Rockford.By 1815 the property included the 60' x 40' four-story stone mill as well as four two-story houses. John Siddall & Co. installed 3,000 spindles in the mill building which were used to spin cotton; the company may have also used power looms. They made cotton yarn as well as muslin, check, and plaid fabrics. The upper part of the mill was used as a machine shop by the Hodgsons.In October 1817, the partnership dissolved when the Hodgson brothers dropped out of the firm and sold their property at a sheriff's sale. The Siddalls and Thorps continued the business under the same name. By 1820, they ran 1,800 of their 3,0000 spindles regularly, processing approximately 1,500 lbs. of cotton per week. They employed 61 people and rented the mill from Sims for $1,500 per year. A flood on Feb. 21, 1822 caused $1,000 in damage to the mill equipment, but the company quickly recovered, and by 1823, they employed between 70 and 80 people and regularly operated 2,500 spindles. The firm ceased business in October of 1823.