It's true that the three-leafed shamrock clover is the... 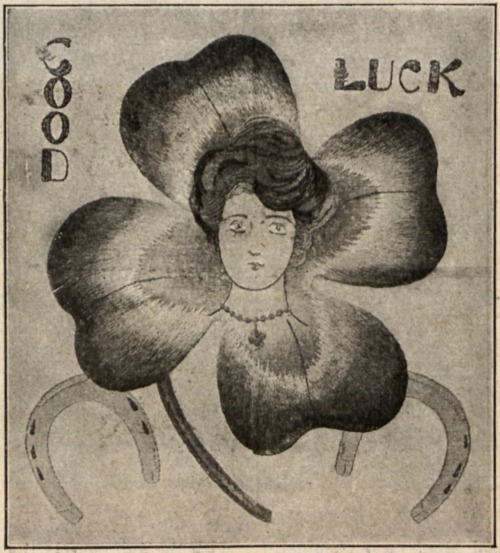 It's true that the three-leafed shamrock clover is the traditional choice for celebrating Saint Patrick's Day, we're testing our luck today and posting this four-leafed clover pattern for an embroidered "good luck pillow" from the 1905 Good Housekeeping Needlework Manualinstead.

The Good Housekeeping Institute described this pattern, advertised in its section for "original and sporty pillow designs" by declaring that

The college boy, or even the common, every-day man or boy, fortunate enough to possess a "den" of his own, would doubtless be well pleased with this "good luck" pillow. It has a distinctly sporty appearance, which is said to appeal particularly to masculine tastes. Stamped and tinted on cream Bulgarian linen. it requires only the "long and short" Kensington stitch for the clover leaf, and simple outlining for the rest. in color to suit the individual taste. Of course, the clover leaf is done in several shades of green. Golden browns could be employed effectively on the rest of the design. A green back is furnished with the top. The bargain counter gift has a flavor all its ownu2014and few enjoy that ufb02avor.

This catalog is call numberTT705 .G66 1905 in Hagley Library's published collections, and is part of a digital collection of materials documenting American women's participation in household handicrafts in the 19th and early 20th century. It was commonly expected that these women would take up such crafts as part of their domestic duties, particularly needlework, a skill set most of them would begin training in as young girls.

Some contemporary feminist critics considered this work to be a frivolous use of women's time and a waste of their intellectual capacity. In Mary Wollstonecraft's A Vindication of the Rights of Woman, the author argued that needlework limited the potential of young girls by stifling their minds and instilling an obsession with ornament over matters of import.

For other women, however, such work provided rare opportunities. Household handiwork could offer outlets for artistic self-expression, a chance to socialize outside the home, and a way to commemorate valued emotional bonds. Women's handiwork also offered economic opportunity through the creation of personal property with real monetary value. Additionally, it opened spaces for entrepreneurial women. Many of the items shown in this collection bear the names of women who leveraged gendered expectations about household handicrafts into occupations as pattern designers, authors, and shop owners.To view this collection in our Digital Archive, click here.