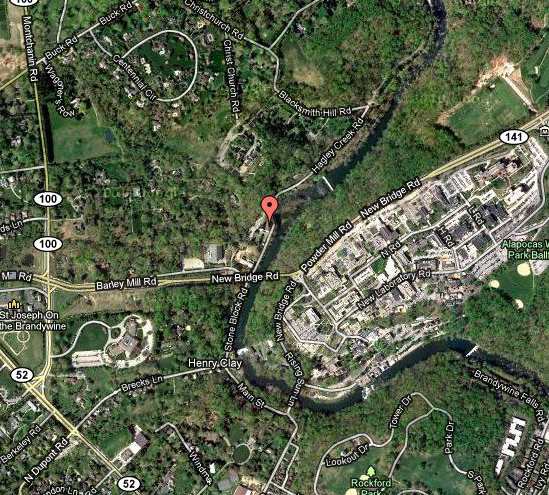 Summary: Originally a partnership between Archibald McCall, Robert McCall, Raphael Duplanty, Victor du Pont, and E. I. du Pont, the company was founded April 30, 1813 and was worth $30,000 at the time. The McCall brothers owned ten of the company's twenty shares, Duplanty five, E.I. du Pont four and Victor du Pont one. Robert McCall and Duplanty managed the mill for a salary of $1000 per year each and Archibald McCall acted as the company's agent in Philadelphia, purchasing machinery and raw materials, selling cloth and yarn, and handling foreign transactions.

The mill was built on the 24-acre lower portion of the land that E. I. du Pont had purchased from Rumford Dawes in 1812; the property, valued at $5500, was given to Duplanty, McCall, & Co. on May 4, 1813. The company may have shared the construction of a dam with the ill-fated Bauduy, Garesché, & Co. The mill building was 73' x 44' and four stories tall with a clerestory and seven windows on each side of the building. A water wheel in the basement provided power the mill, but the wheel had an unusual design and caused perennial problems. Workers rented houses from John Hirons, Jr., owner of the "Sharon Factory" on Squirrel Run, until 1815, when ten tenement houses were completed on the Duplanty, McCall, & Co. property.

E. I. du Pont financed most of the mill's construction. The mill contained machinery for picking, carding, drawing, roving, mule spinning, reeling, and eventually bleaching, dyeing, and weaving. The 1800 spindles were capable of spinning No. 25 to No. 100 thread (double and triple) and No. 20 to No. 150 cotton yarn; however, as British goods flooded the American market after the end of the War of 1812, demand for these high-numbered threads was reduced and the finest thread the company actually ever produced and shipped was No. 70. The mill produced several kinds of cloth, including chambray, ticking, shirting, drilling, bed drilling, and check. Fabric and yarn could be dyed blue, black, brown, buff or bleached, or left unbleached (gray).

The Commissary General of the US Army was the company's biggest customer. The company also sold their products through a network of agents. In 1815, the company employed 46 workers.Duplanty sold his share of the firm on May 1, 1813, largely due to a conflict between himself and Victor du Pont's son-in-law, William Clifford that had spilled over from his partnership with du Pont in the parallel textile operation, DuPont, Bauduy & Co. Archibald McCall pulled out of the company by the summer of 1817, transferring his shares to his brother, Samuel McCall because of severe debts.

The firm terminated operations on August 17, 1819, claiming that they could not compete with low prices of imported British goods. The attempted dissolution of the firm led to extreme conflict between E.I. du Pont, Raphael Duplanty, and the McCall brothers, and took years to settle. The mill building was purchased by E. I. du Pont, who assumed the company's debts in 1821 and repaired the building for lease to a company called the “Hagley Cotton Factory.” The business, which was formed in early 1822, included business partners Archibald & Robert McCall, Charles I. du Pont, Charles Dalmas, William Reed, and George Thomas but was unable to find enough investors to reopen the mill.

The building was eventually leased to a variety of companies until it was purchased by E. I. du Pont de Nemours and Company as part of the settlement of E. I. du Pont's estate in 1845.