Beer brewing began in the Delaware Valley in the mid-seventeenth century when early Swedish settlers first brewed beer in the home. Quakers established the first commercial brew houses in Philadelphia in 1683. Eastern Pennsylvania's rich farmland provided an ample source of barley and hops, key ingredients for brewing beer, and the proximity of the Delaware River allowed Philadelphia brewers to ship beer south to Wilmington. By the American Revolution, Philadelphia was among the country's leading brewing centers, and remained so through the late-nineteenth century. 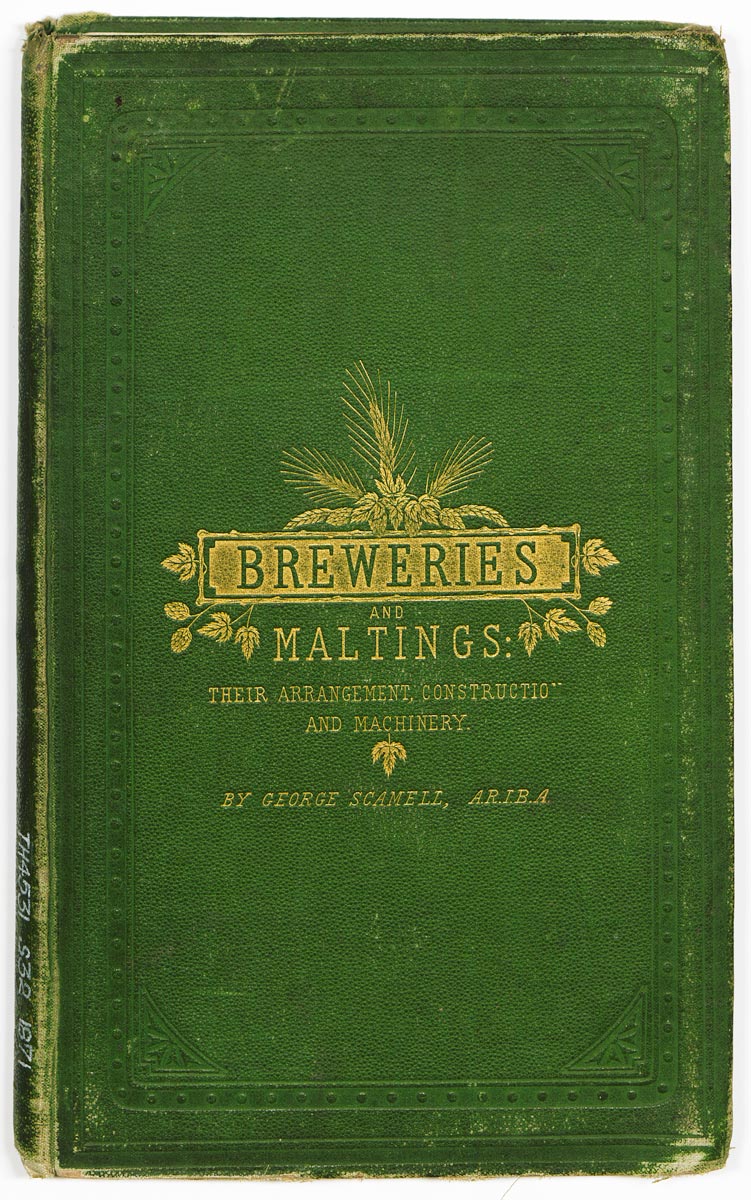 Breweries and Maltings: Their Arrangement, Construction, and Machinery
by George Scamell
1871 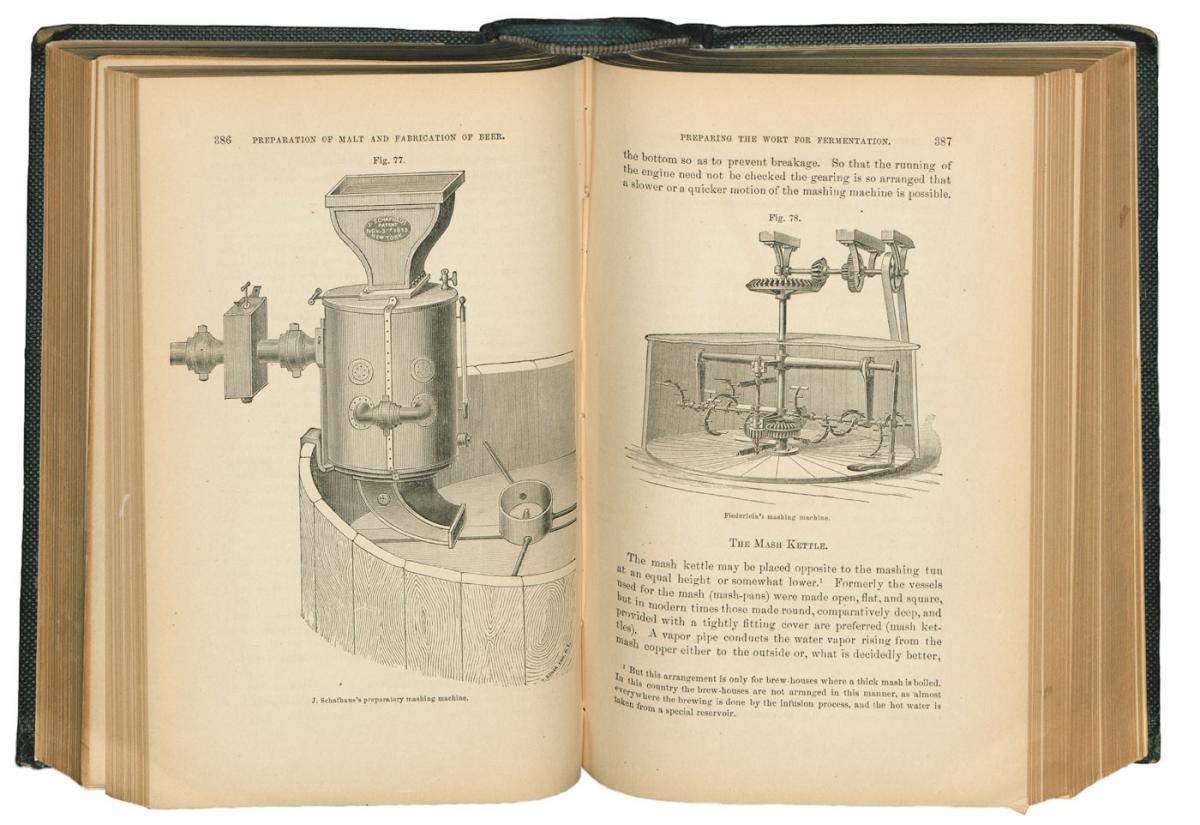 Machinery for mashing barley grain during the brewing process

The Theory and Practice of the Preparation of Malt and Fabrication of Beer
by Julius E. Thausing
1882 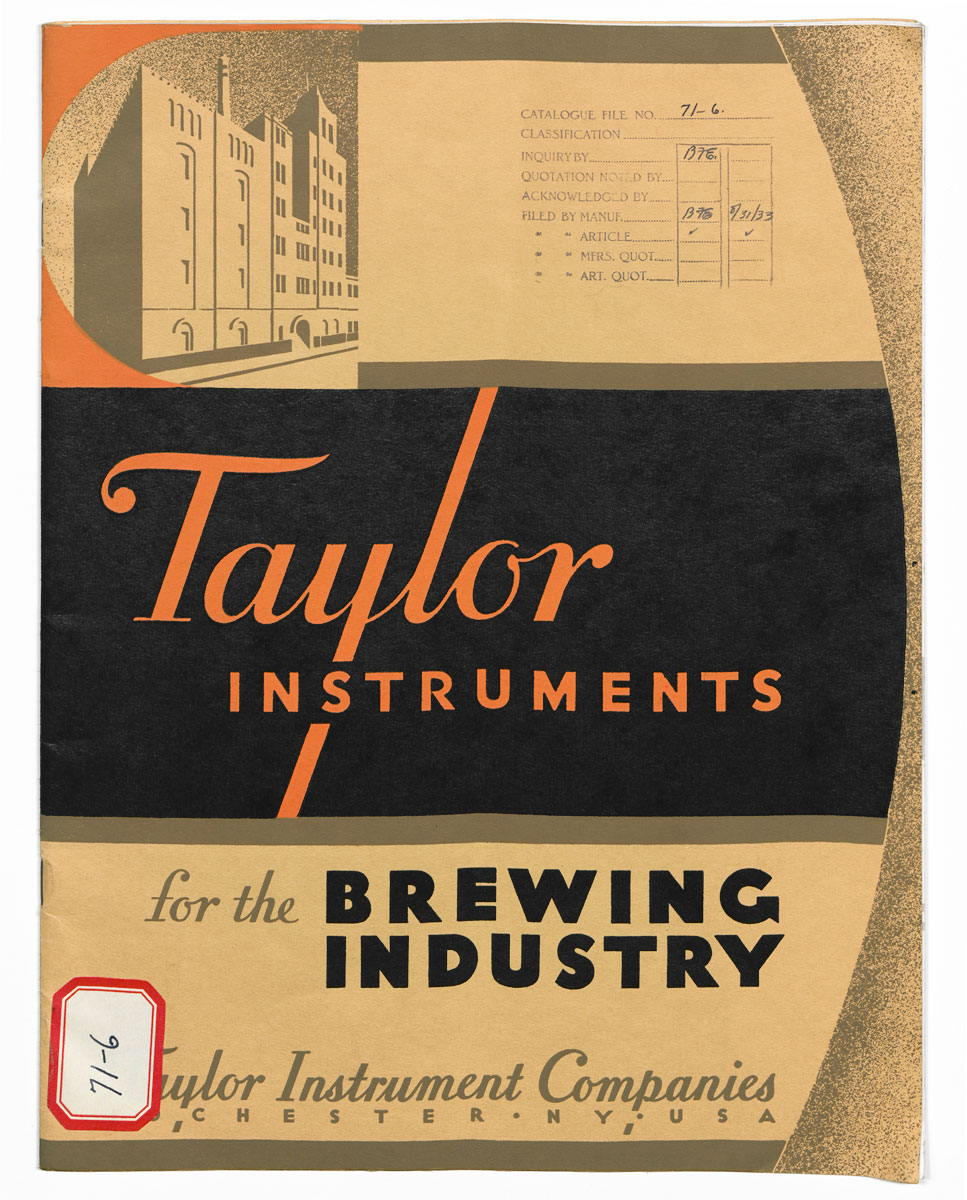 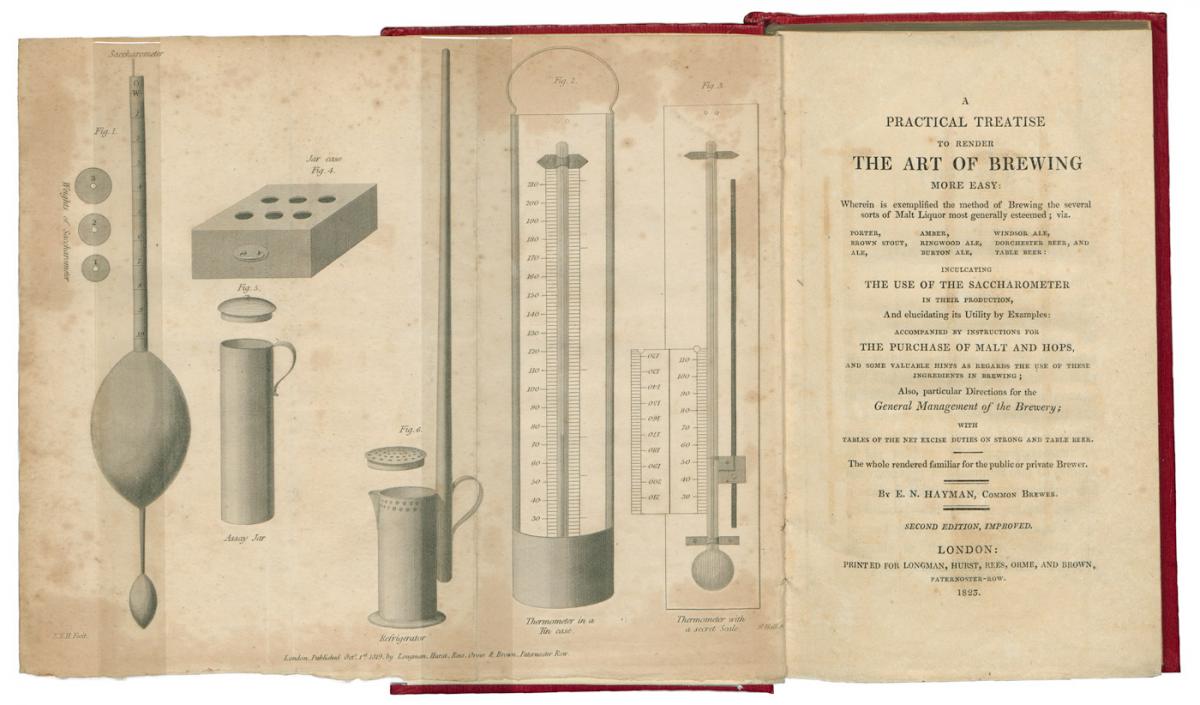 A practical treatise to render the art of brewing more easy
by E.N. Hayman
1823

Text from title page:
"A Practical Treatise to render the Art of Brewing more easy:
Wherein is exemplified the method of Brewing the several sorts of Malt Liquor most generally esteemed; viz.
Porter, Brown Stout, Ale, Amber, Ringwood Ale, Burton Ale, Windsor Ale, Dorchester Beer, and Table Beer:
Inculcating the Use of the Saccarometer in their production,
And elucidating its Utility by Examples:
Accompanied by instructions for the Purchase of Malt and Hops,
And some valuable hints as regards the use of these ingredients in brewing;
Also, particular Directions for the General Management of the Brewery;
With tables of the excise duties on strong and table beer.
The whole rendered familiar for the public or private Brewer.
By E.N. Hayman, common brewer.
Second edition, improved.
London:
Printed for Longman, Hurst, Rees, Orme, and Brown,
Paternoster Row
1823" 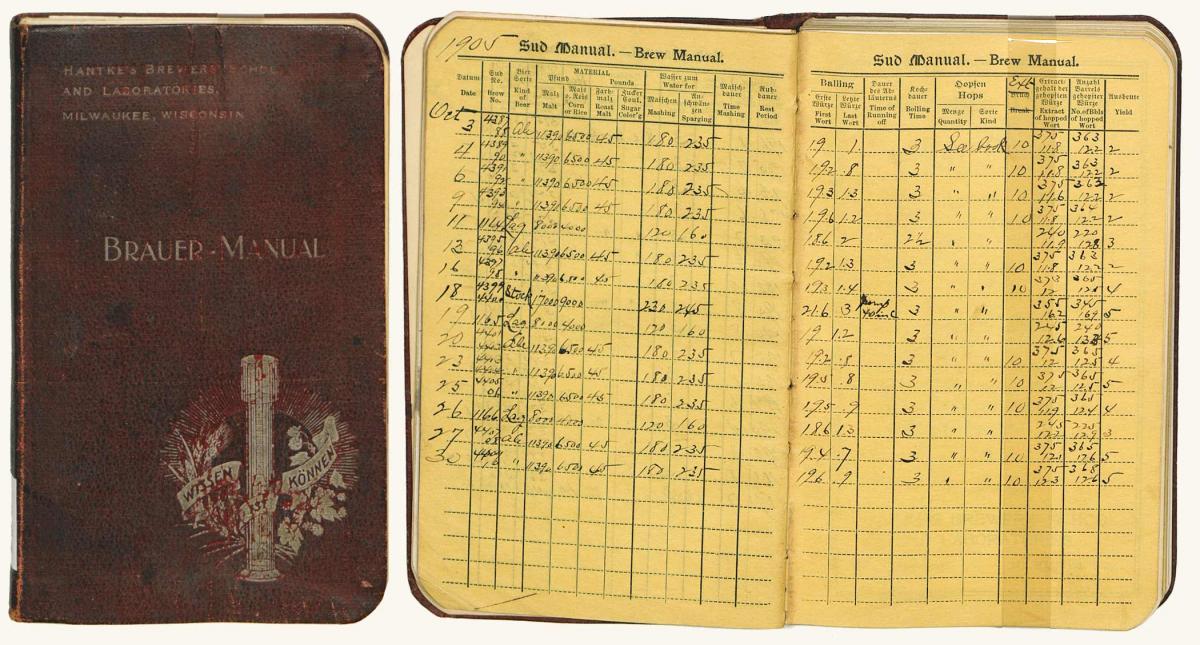 This brewing manual handbook, in English and German, has space for brewers to log the amount and type of malt and hops used, the amount of water used for mashing and sparging, length of time the wort is boiled, and the final yield of hopped wort for each batch of beer. 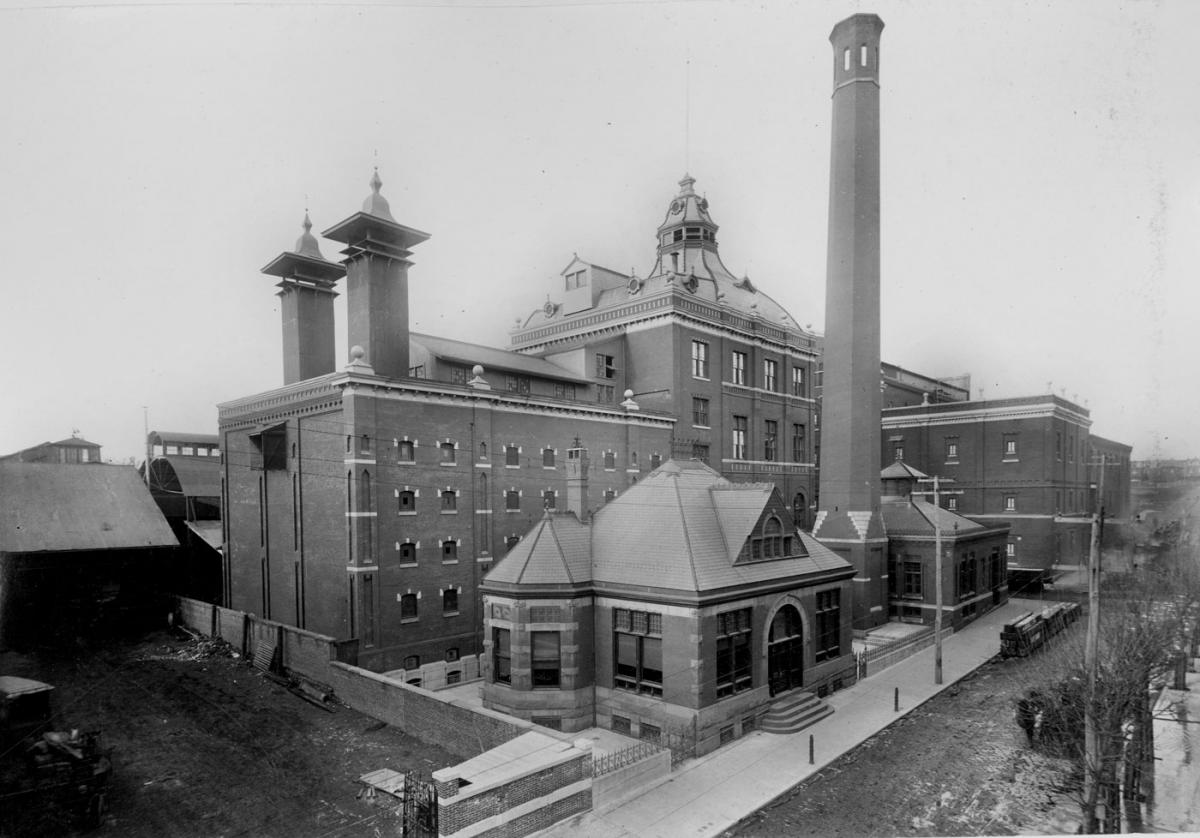 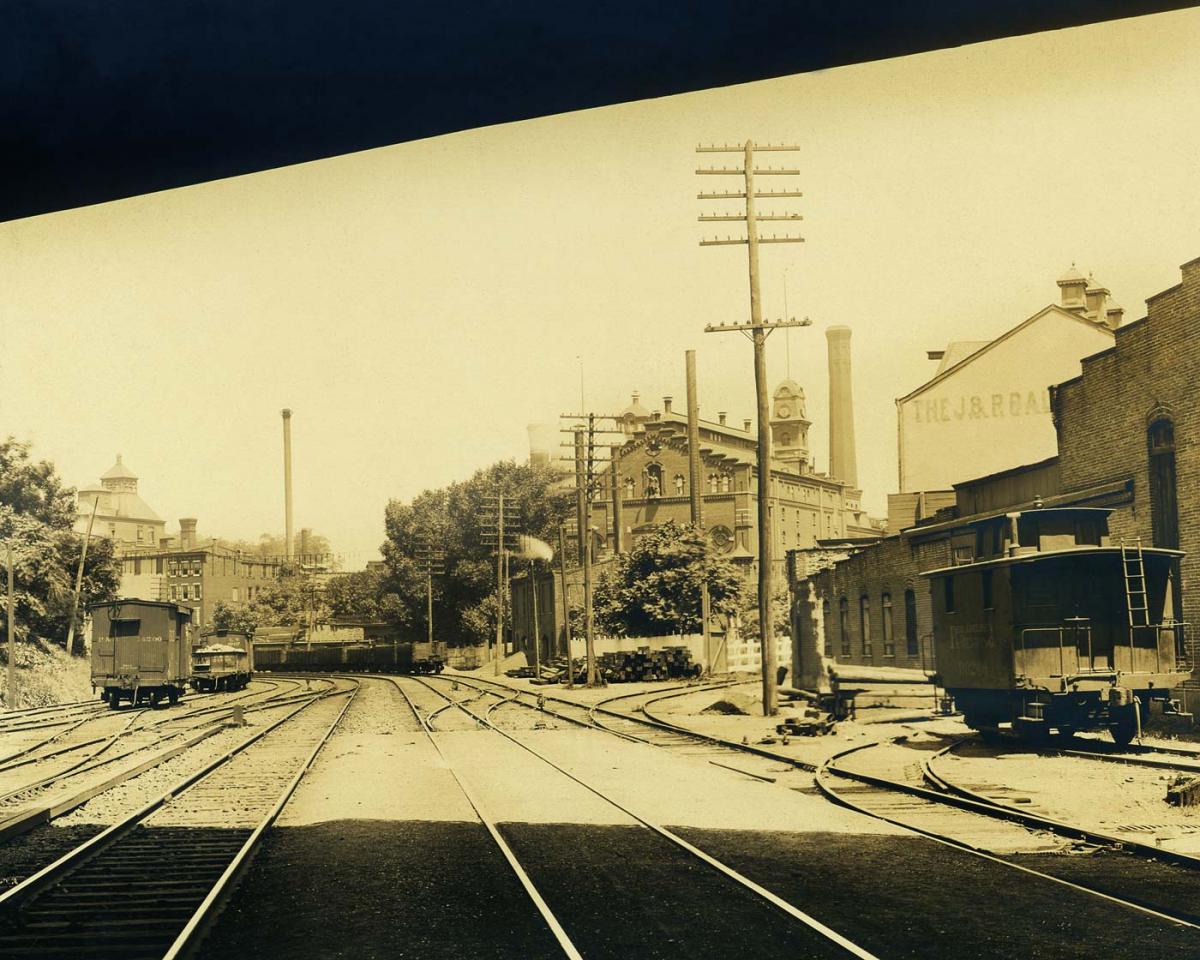 This photograph shows two of Philadelphia's largest breweries, the Bergner & Engel Brewery and the J & P Baltz Brewery, both located in the Brewerytown section of the city. A statue of King Gambrinus, the unofficial patron saint of beer, can be seen on a ledge near to top of the Bergner & Engel building. 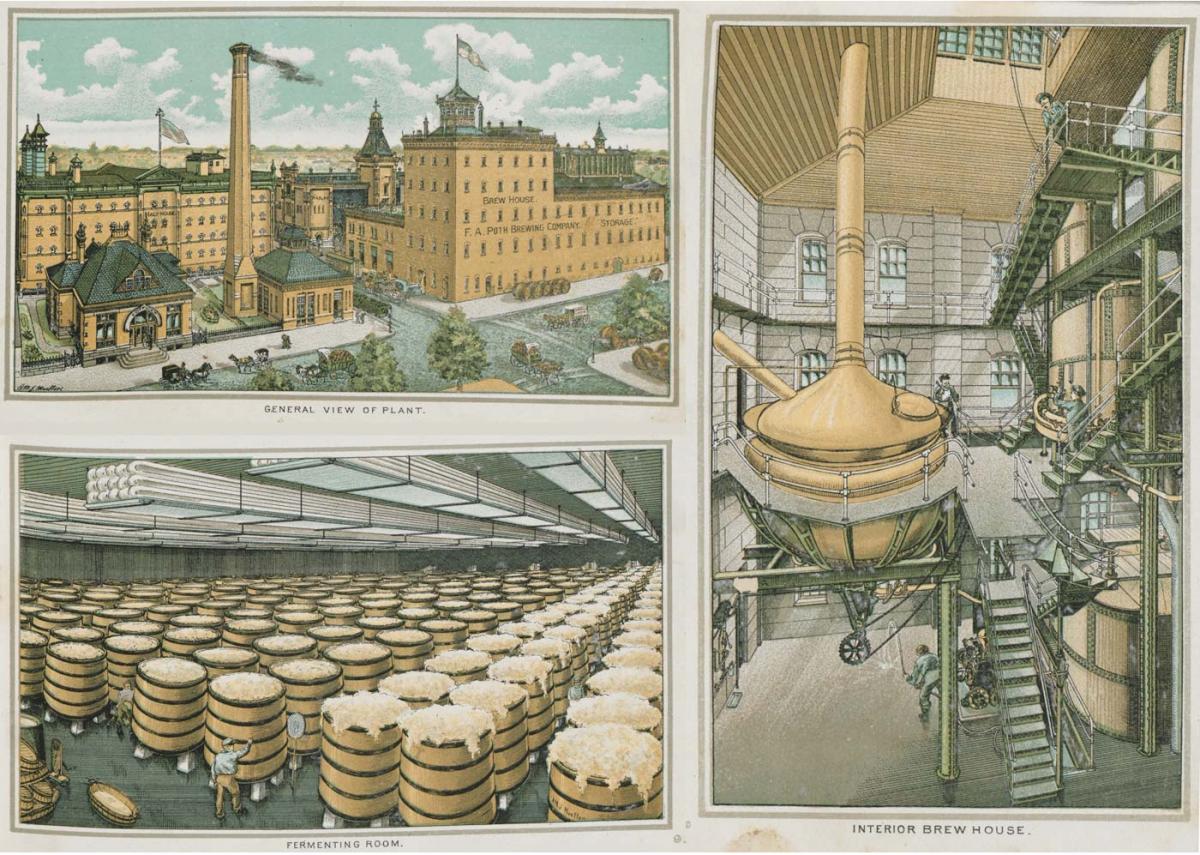 View the full album in the Hagley Digital Archives 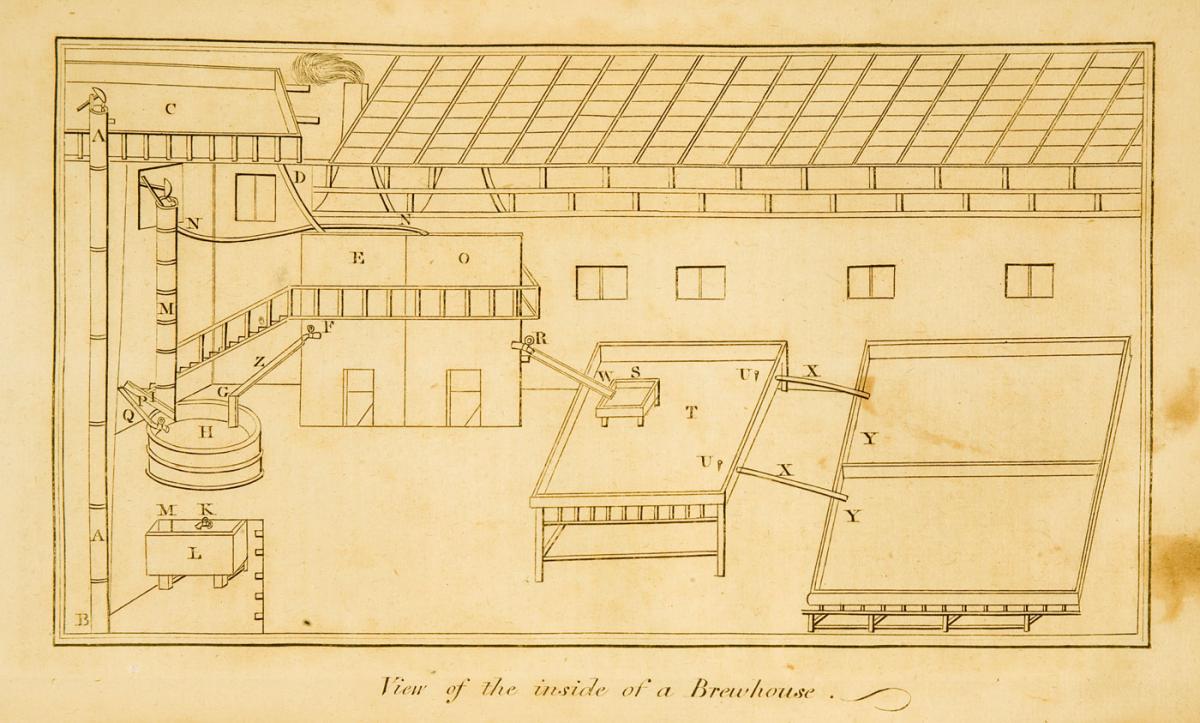 "View of the inside of a Brewhouse"

The Domestic Encyclopedia
by A.F.M. Willich
1821

Of the Brew House

The following is an eligible construction where brewing is followed as a trade.  "The cold liquor [water] pump A, raises the water from the river or well B, which, as well as the wort pump M, is driven by a horse with proper machinery, which likewise grinds the malt used in the brew-house.  The grinding house is situated between the pumps, as may be seen by the mill spout P, which conducts the malt from the mill into the mash tun H.  The liquor from the river B, is pumped into the cistern or reservoir, where it is ready at all times during the hurry of brewing; and from the cistern it passes through the large pipe D, into the liquor copper, E, where it may be stopped by a cock at the extremity of the pipe.  The liquor when warmed for mashing is let into the mash-tun, H, by opening the cock, F, in the bottom of the copper, and runs down the trunk Z, which carries into the raising spout, G, in the mash-tun, H, this spout by a notch in the moveable or false bottom of the mash-tun, conducts the liquor between the moveable and real bottoms, which, by ascending, assists the mashing very much.

The extract or wort is let go, by turning the cock, K, into the underback, L, and is from thence carried by the horse pump, M, into a level with the wort copper, O, and runs from the pump through the pipe,N, into the wort copper.

When cold liquor is required for mashing, as is the case in small beer brewing, it is obtained from the cistern, C, by the pipe, Q, which communicates with it.

Thus these three very laborious parts of the business, viz. pumping the liquor from the river or well; mashing, and pumping up the worts into the copper, may easily be performed by two men; and they are able to mash a very considerable quantity of malt, and attend to the steaming of the casks, liquoring the backs, &c. between the mashes.  When all the worts are in the great copper, O, and are boiled sufficiently, they are run off into the first back, T, by turning the cock, R, from the spout, W, conducting the worts from the drainer, S, which detains the hops.  This back communicates with the two large backs, Y, which are sufficient to contain all the worts, and they may be laid at a greater or less depth, by using one or both these backs, stopping either of the pipes, X, by putting in one of the plugs, U.  The situation of  these two backs is higher than the fermenting tuns, and by pipes the worts are conveyed into them below; and if there is conveniency, the tuns, when cleansing, ought to be high enough to fill the casks in the cellar by means of a leathern pipe.