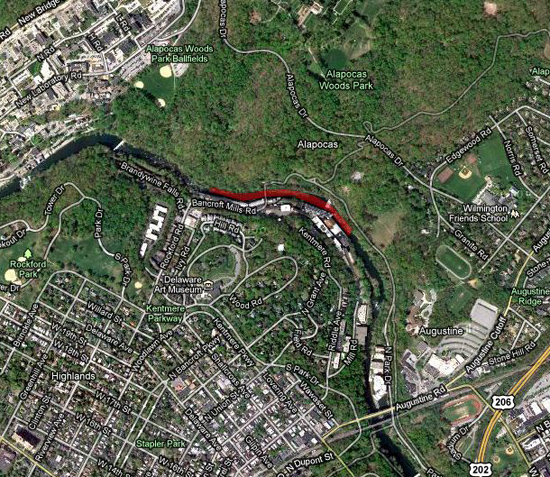 Summary: Joseph Bancroft was first introduced to the textile industry in the early 1820s as a partner in the Brandywine Village flannel mill operated by his father, John Bancroft Jr. From 1827 to 1831, he served as superintendent of William Young's cotton factory, Rockland Manufacturing Company. In 1831, Bancroft purchased the Rockford property, located on the western bank of the Brandywine immediately north of Gilpin's Mills at Kentmere. Thomas Janvier, a business partner of his brother, John Bancroft III, provided financial backing for the purchase.

The first 25-acre section of property was purchased from William Young for $7,000 on March 24, 1831. A second 25-acre section, part of a former Brandywine Mill Seat Company property containing a 2.5-story mill, a two-story boilerhouse (which created steam to heat the mill), a stone barn, two houses, and two cottages, was purchased from John Torbert for $8,000 on July 29, 1831. Bancroft's company, known as Rockford Bleaching & Dye Works, employed 67 people and utilized 1,760 spindles and 30 power looms to weave 40,000 lbs. of cotton into 150,000 yards of cambric muslin per year. The cloth was sold in Philadelphia, New York, and Baltimore.

A January 1839 flood destroyed the boilerhouse and mill dam and caused $1,500 in damage to the looms on the mill's first floor. A new two-story, 70-foot-long building was constructed to replace the boiler house; a new boiler, machinery, and repair shop occupied the first floor, while the second floor was leased to Bancroft's brother-in-law, J. Morton Poole, and used as a machine shop.After Poole moved to Wilmington in 1847, Bancroft expanded into the second floor of the new boiler house. New technology was also introduced into the mill during this period, with self-acting mules, fly frames, and ring spinning added in the 1840s and new bleaching, starching, and calendering machinery as well as two kiers and a settling pond added in the late 1850s and early 1860s. Bancroft worked to improve finishing processes, and by 1862, was providing cloth to window-shade manufacturers who were unable to import cloth from England due to the war.In 1866, Joseph's sons, William Bancroft and Samuel Bancroft Jr., became co-partners and the firm was renamed Joseph Bancroft & Sons.

The brothers continued the business after Joseph's death in 1874, and in 1889, the firm's name was changed again, this time to Joseph Bancroft & Sons Company. The company continued to expand during the late nineteenth century. One of the mills partially burned on Oct. 25, 1870, causing a $6,488 loss, but was repaired shortly thereafter. The mill dam was also rebuilt in 1878.By the 1880s, the company had begun dying their own cloth as well as cloth for other textile manufacturers. In 1895, the company purchased the neighboring Gilpin's Mill property at Kentmere from James Riddle's heirs for $230,000. In 1905, they purchased approximately 14 additional acres of land and water as well as additional water rights from the E. I. du Pont de Nemours and Company for $33,601.75.The company moved their manufacturing operation to the adjacent Gilpin property, utilizing the original Rockford property for bleaching, dyeing, and finishing. In 1910, the company bought an additional property in Reading, Pennsylvania. They consolidated their manufacturing operations at the new site and used the entire Brandywine plant for bleaching, dyeing, and finishing processes. By 1930, Joseph Bancroft & Sons Co. was the largest cotton dyeing and finishing works in the world, and by the mid-twentieth century, the last remaining textile industry on the Brandywine.

In 1961, the company was purchased by Indian Head Mills, Inc., and in 1972, Indian Head sold the finishing plant along the Brandywine to a group of Bancroft department heads calling themselves the Wilmington Finishing Company. The company itself was sold to Beaunit Corporation in February 1975.

The plant changed hands again in 1981 when it was purchased and operated by the Wilmington Piece Dye Company until the group's bankruptcy in 2003. A portion of the mills has recently been renovated and converted to condominium housing.

Pomeroy and Beers, Atlas of the State of Delaware, 1868. Hagley Digital Archives.