According to his colleagues, Z. Taylor Vinson’s affinity for catalogs from foreign companies made his collection unique from other collections of automobile literature developed by his peers.

An example of his interest in foreign makers is evident in the large number catalogs from the legendary Italian-maker Ferarri. The Vinson collection includes hundreds of items from Ferrari that cover much of the company's history.

Among his treasures is a 1940 catalog for - what is considered - the first-ever Ferrari. Only two were built but it marked the beginning of the famous Ferrari brand.

Vinson told the story of his acqusition of this rare piece in his "Auto-biography":

In November '96, I read with interest the October 30 issue of "Autocar", which showed a copy of "the first Ferrari brochure", on something called the "815." - I immediately added it to my want list. As I had only known of Ferrari as a postwar manufacturer of cars, I photocopied the page and a couple of days later showed it to Dick Merritt, the font of all wisdom regarding the "prancing horse." He explained that, as a condition of his severance with Alfa Romeo in '39, Enzo Ferrari had agreed not to put his name on any kind of machine for the next four years, and that his new car, the 815, was identified as a product of "Auto Avio Costruzione". Almost as an afterthought, [Mr. Merritt]  went on to say, "there's a copy available if you're interested."

The asking price was twice the highest amount I had previously paid for an item, and 10% less than I'd paid for my '73 Triumph in '83. Nevertheless, that's what a savings account is for. I called the [seller], Fred Repass, and when he explained that there were less than 10 known to exist, I didn't even haggle, as it seemed like a bargain at the price. In the meantime, I ordered a book on the "815" from another source which, I was told, contained a reproduction of the piece.

The deal was quickly settled, and when the folder arrived, I noted with pleasure that the name of Enzo Ferrari appeared on the rear cover. It was accompanied by a color photocopy of an article which explained that Ferrari had ordered 100 of the folders but, due to the war, had never picked them up. Only two cars were made. Existence of the piece was not confirmed until 1988 when Sotheby's auctioned one for $8,550. According to the article, only five copies are known (the [seller] had said eight to ten). Whatever, it's bound to be one of the rarest pieces of [automotive] literature.

Graphic from the 1940 Ferrari catalog 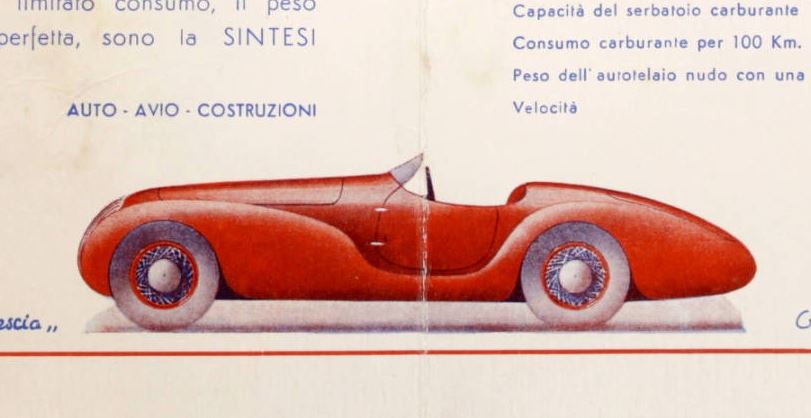 View the Ferrari 815 catalog in the Hagley Digital Archives

Questions or comments? Please email us at askhagley@hagley.org