Many of these immigrants were the wives, children, siblings, and friends of the large group of Irish workers employed at DuPont's powder yards on the Brandywine River in Wilmington, Delaware.

The relationship between E.I. du Pont de Nemours and Company and Irish immigrants began almost as soon as the company was founded. In July of 1803, E.I. du Pont noted in a letter to his brother, Victor, that "the arrival of three boats of Irishmen" had "furnished all the workmen we needed" to construct the mill. Although du Pont was initially skeptical about the ability of Irish workers to excel at skilled jobs, by 1804, he had chosen four Irishmen to become powder-making apprentices.

The company soon began to help their workers secure passages for family members. The earliest group of immigrants on record arrived on the ship "Helena" in October of 1809. Powder yard employee John Barrett paid Wilmington merchants John and William Warner $176.80 in cash to have eight of his relatives brought to the United States from Ireland. It appears that DuPont paid the remaining $232.51 to the Warners and then made regular deductions from Barrett's wage account until the balance of the passages was paid off.

By 1823, the company was working with Philadelphia merchant John Welsh to secure passages for immigrants. Welsh brought over approximately 50 immigrants between 1823 and 1829. Several of them traveled on the ship "Israel" which Welsh chartered in 1827 to bring a load of stone across the Atlantic.

In 1830, E.I. du Pont de Nemours and Company established a relationship with the Philadelphia shipping agency Robert Taylor & Company and began regularly booking passages from Ireland. Although Taylor handled the majority of the passage requests during this time period, agents Washington Rice and James C. Aiken also occasionally booked passages for the company as well.

Approximately 350 DuPont-sponsored immigrants arrived between 1830 and 1845 including the wives and children of many of the powder men. The immigrants were spurred by the increasing demand for labor in rapidly industrializing America as well as political events at home.

Technological advances also made the journey more appealing. By 1830, the ocean crossing had become much less arduous than it had been just fifteen to twenty years earlier. Most ships carrying Irish emigrants were now built to carry passengers rather than cargo, and improvements had reduced the length of the trip from eight to ten week to about five. 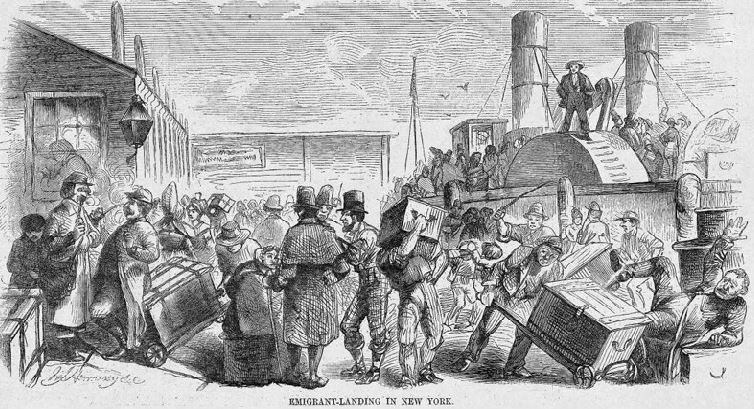 The potato blight hit Ireland in the late summer of 1845, but it wasn't until the next year that the fallout became apparent. The already crowded ships became increasingly cramped as more and more people made the decision to emigrate. Ships began to sail year-round instead of seasonally, and many people chose to risk traveling in poor weather over the prospect of starvation at home.

By the early 1850s, DuPont had begun to sell pre-paid passage tickets on behalf of George McHenry and Company. In addition to arranging passages for their own workers, DuPont also sold passage tickets to other local residents.

The company was still placing advertisements for passage certificates and drafts in newspapers such as the Delaware Republican as late as 1857. However, the flow of emigration, at least in the form of pre-paid passage certificates, had waned considerably by the middle of the decade. The last passenger list in DuPont's records dates to 1855 and lists just twenty people who purchased passages through Robert Taylor & Company between August 1854 and April 1855.