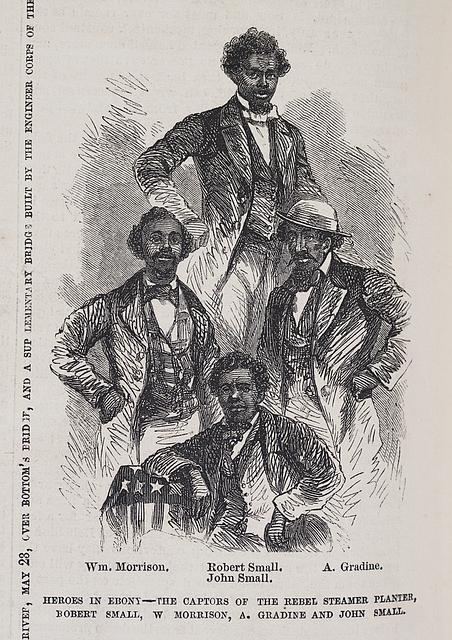 Robert Smalls let the crew (some are pictured) know that their time had arrived. The enslaved sailors fired the steamer's boiler and readied the engine. Robert, who was said to bear a striking physical resemblance to Captain Relyea, donned the officer's coat and straw hat and assisted his shipmates with their preparations.

Around 4 a.m. on 13 May, Robert raised the Confederate and South Carolina flags and gave the order to slip the ropes holding Planter to the wharf. Guards at the dock did not question the steamer's departure knowing it was to deliver cannons that morning.

Robert directed Planter to a nearby wharf to pick up the crew's families, who by prior arrangement were hidden on the steamer Etowah. After securing the women and children, Robert steered Planter out into Charleston Harbor.

Robert Smalls had no trouble navigating the Planterthrough the harbor and past Confederate defenses. Although officially designated the steamer's wheelman, Robert had actually served for more than a year as the pilot. (He was not called the pilot because slaves could not legally hold the position.)

Robert had been a pilot since the mid 1850's, giving him an extensive knowledge of the waters around Charleston. Piloting the Planter for the Confederate military taught him the signals and approaches necessary to navigate the harbor without suspicion.

Dressed as Captain Relyea, Robert stood at the captain's usual position in the wheelhouse and sounded the proper signals with the steamer's whistle as they passed the harbor's forts. He passed Fort Sumter, the last and most formidable of the Charleston defenses, close enough to exchange a few words with the fortification's sentries.

Once clear of Sumter, Robert ordered full steam and steered directly for the U.S. blockading squadron.

Image: From Frank Leslie's Illustrated Newspaper, 21 June 1862, sketch appeared above a caption that read: "Heroes in Ebony - The Captors of the Rebel Steamer Planter, Robert Small, W. Morrrison, A. Gradine, and John Small." (Library of Congress)