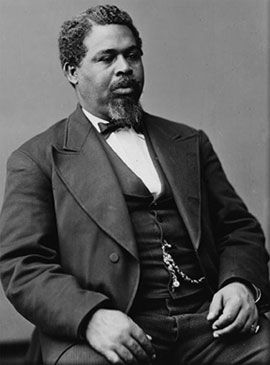 Robert Smalls had a distinguished postwar career in public service, becoming one of the state's leading African-American politicians. He served as a Republican member of the South Carolina House of Representatives from 1868 to 1870, then as a state senator from 1870 to 1874.

During his time in the South Carolina legislature, Smalls also served as an officer in the state militia and achieved the rank of major-general. Although consumed in a political scandal over no-bid contracts, he won election to the U.S. House of Representatives in 1875.

Following a failed reelection bid in 1886, Smalls was appointed U.S. Collector of Customs at the Port of Beaufort, South Carolina in 1889. He held this position until the Wilson administration replaced him in 1911.

Robert Smalls died at his home in Beaufort, South Carolina in 1915. He was hailed as one of the most popular and well respected of the state's African-American citizens. He also received recognition for being unafraid to take on South Carolina's white Democrats, including former Confederate general Wade Hampton and "Pitchfork" Ben Tillman.

His most enduring legacy, however, was his daring escape with the steamer Planter. This act gave numerous emancipated slaves hope and encouragement to forge a new life in South Carolina. It also set the stage for Smalls' postwar prominence and enabled him to represent his people and state in the national political arena.